Here's how to stop the licking madness: Opinion 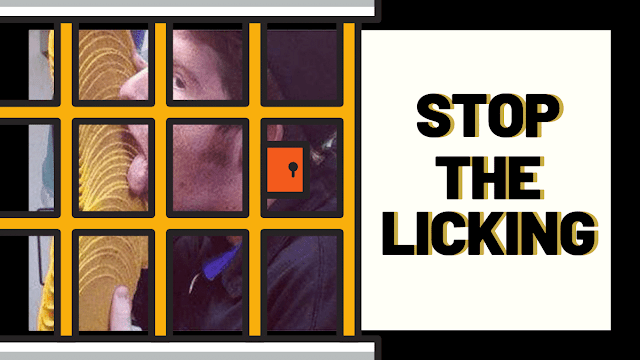 Illegal lickers need to be put on notice now, says columnist J. Jones. His tough plan to get it done involves throwing the book at all illegal lickers.

By now, we have all seen the teen who licked the Tin Roof flavor Blue Bell ice cream in a Northeast Texas Wal-Mart located right here in the Ark-La-Tex city of Lufkin.

And because the licking craze started here in Northeast Texas and the Ark-La-Tex, it should end here, too.

We reacted in disgust again after a video showed a young girl licking a tongue depressor and then allegedly putting it back during doctor's office visit as her mother giddily filmed it. Not to be outdone, a Taco Bell worker was photographed allegedly licking a row of taco shells destined for public consumption.

This is filthy behavior. It's wrong, it's immoral and, thankfully, it's illegal.

Ever since the news of this illegal licking was brought to the public's attention in Lufkin, my previously happy trips to the grocery store have been spoiled. I've heard the same from others in the community, too.

I look suspiciously at the serve-yourself doughnut area and the uncovered baguettes.

And let's not even talk about the hot soup I used to enjoy from my favorite grocer. I now stare at the pot of broccoli and cheese soup with a suspicious glare — trying to find evidence of tampering from a devious illegal licker or spitter.

Fast casual restaurants are a problem, too. Previously, I would grab an uncovered fork and knife without a second thought. Now, I reluctantly take one of each and scrupulously inspect every centimeter of the utensils.

So what can we do?

Well, the answer is staring us right in the face.

It's our laws. If you find an illegal ice cream licker, the person needs to be arrested. If found guilty, the public needs to throw the ice cream back at them... figuratively, of course.

In Texas, licking ice cream in a store can be punishable by up to 20 years in prison. In recent days, some people have argued that a 20 year sentence would be too much. However, they would be wrong.

As a society, we have to take any food tampering seriously, or we risk increasing problems with the contamination of our food supply.

So if I'm on a jury here in Northeast Texas, I will carefully look at all the facts, carefully deliberate... and then, if the person is really guilty, try to persuade my fellow jurors to sentence the convicted illegal licker to the max.

Yes, twenty years in prison for the illegal licker. I have no problem with that.

The illegal licker will probably be out in five, but it will serve notice to the public that Northeast Texas won't tolerate illegal lickers in grocery stores or anywhere else, for that matter.

As I was writing this article, my dad called, and I decided to ask his opinion about what should happen illegal lickers.

I was expecting my no-nonsense father to say something just a little lighter than the death penalty.

To my surprise, he said illegal lickers — every one of them including teens, young adults and older adults — should be charged with only a misdemeanor and given hard labor such as picking up trash for a max of 30 days.

Don't ruin their lives for doing something stupid just once, my dad said.

I disagree with him, but I understand his point. However, my dad was the wrong person to ask because he has an enviable immune system. If someone coughs in my direction, I usually get sick while my dad has not been sick in 16 years.

These are people who could be become extremely sick or even die due to harmful germs and bacteria from the illegal licking, because they don't have the strong immune system that my dad enjoys.

Now, illegal lickers are becoming more emboldened. CNN reports that there are websites and groups of friends online that privately discuss their individual illegal licking exploits and share photos and videos of their dirty deeds.

That means an example needs to be made of someone so all this illegal licking nonsense will stop.

Knowing me, however, I might take pity on the illegal licker if they had a hard-luck story and go easy on them — with maybe a five or ten year sentence. Hopefully, however, I would do the right thing and give them the max.

Someone has to take a stand against illegal licking. Like I mentioned earlier, the illegal licking started in the Ark-La-Tex. And it should end here, too.