Home Arkansas Baseball News Sports Texarkana Texas Even season for the Texarkana Twins after Generals: A 14th win at home tonight would give Twins a winning season once again

Even season for the Texarkana Twins after Generals: A 14th win at home tonight would give Twins a winning season once again 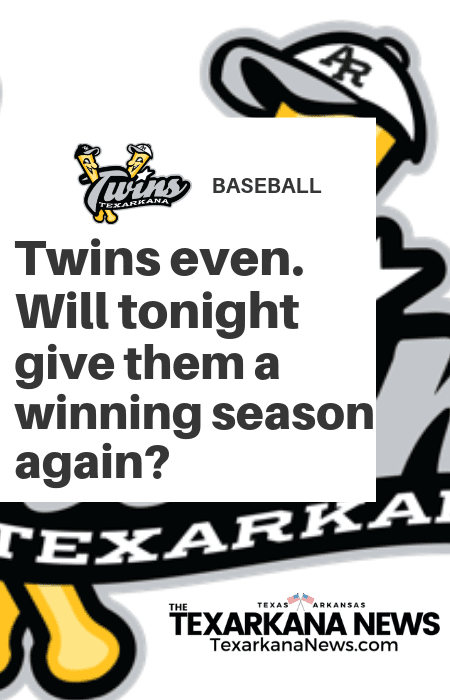 The Texarkana Twins evened out their season record to 13-13 against the Victoria Generals Monday night due to an early deficit that was difficult to overcome.

The good news is that the Twins can regain their winning season tonight at home in Texarkana (Tuesday, July 9) if the team beats the Baton Rouge Rougarou and gain a 14th win for the season. You will want to buy a ticket.

Arriving for the game in Victoria, Texas after a win last night, the Twins got into trouble early in this game against the Victoria (21-11). Digging themselves a hole that they could not get out of and it all started in the first inning.

Matt Sesler started on the mound for the Twins tonight and immediately found himself in trouble after a Single and 2 stolen bases by Tanner Roach and a walk by Johnathon Tapia.

Then DH Deryk Serbantez came up to the plate and, after battling to make the count 2-2, got a hold of a ball and drove it over the Left Field wall for a 3-Run Home Run which gave the Generals a 3-0 lead.

After a scoreless 2nd Inning, the Twins had their first opportunity after Lee Thomas was advanced to 3rd by a Tom Lichty Single, which extended his hitting streak to 14 games, and it brought Reese Durand up to the plate with runners on the corners and one out.

Durand then hit a ground ball on the right side which was flipped to second for the second out but could not be returned to first in time to get Durand.

During the ruckus, Lee Thomas sprinted home to give the Twins their first run on the night.

But then the Generals answered right back scoring 4 more runs in the bottom of the inning which game them a 7-1 lead.

There was not another run until the 8th inning when the Twins plated their second run off a Shea Gutierrez Double but once again the Generals answered back with three more runs to give them a 10-2 final score.

One bright spot would be RHP Brian Hamilton’s relief performance giving up no runs and striking four through four Innings.

Overall it was a night to forget for the Twins and they will have an opportunity to quickly put this behind them tomorrow as the Baton Rouge Rougarou come to town for the beginning of a two game series.

For more information about the team visit texarkanatwins.com or call 903-294-PLAY.