Could John Ratcliffe's staff keep their jobs with a new member of Congress? — OPINION 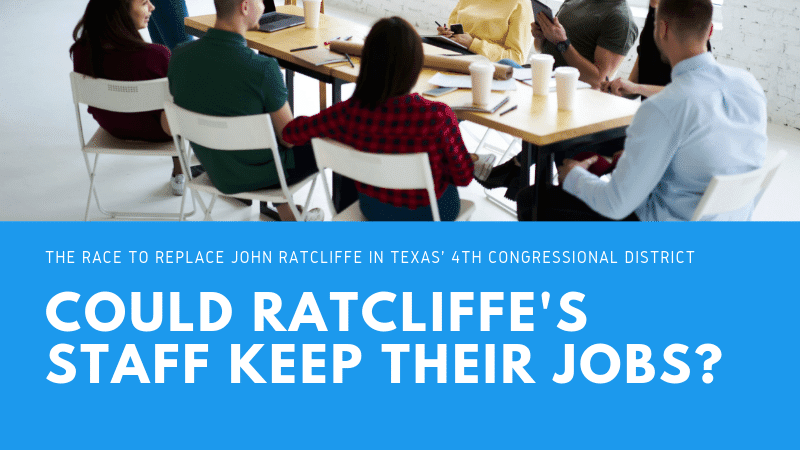 Since Sunday, I have talked to around sixty different county judges, state representatives, mayors, former mayors, and even a few local political scientists in Northeast Texas.

All of the conversations were about the upcoming special election to replace Rep. John Ratcliffe who will almost certainly be confirmed as Director of National Intelligence after his nomination by President Trump.

Speaking to 60 officials in 60 hours has left me with lots of new information about Texas' 4th Congressional District that will make me a better reporter as I take on the daily task of covering the special election.

While it was dizzying to speak about the same subject to so many different people, it allowed me to quickly identify some common themes among local officials.

The one thing that surprised me most was that the district-based staff - yes, the staff - of Congressman John Ratcliffe is almost as well-liked as he is with influential Northeast Texans.

Rep. Ratcliffe has district offices in Sherman, Rockwall, and Texarkana. According to many people I have spoken with, this group of individuals has done an effective job of serving the people of the 4th District by assisting local constituents with problems and helping to advance critical local projects in the district.

This is a massive compliment for the staff of Rep. Ratcliffe and the congressman that chose them.

Many people told me how proud they were that Rep. Ratcliffe was named as the nominee for DNI Director,  but they almost always also mentioned that they would very much miss his staff members.

However, two mayors and two county judges told me they were not willing to assume that all Texas-based Ratcliffe staff would be leaving when a new member takes office. In fact, I was told they would ask Republican candidates in the primary race to pledge that they would keep much of Ratcliffe's staff based in the district offices if they were elected to Congress.

I mentioned this to the mayor of Denison, Texas, by informing her what others had said about asking candidates to make this pledge.

Mayor Janet Gott paused and thought about it for a moment. Then she said it was a good idea and heaped high praise on Rep. Ratcliffe's Sherman office staff.

Typically, a pledge such as this might not be well received by candidates.  But it's not impossible to think that demands from prominent local officials could work could this time because of the uniqueness of the situation.

The special election to fill John Ratcliff's seat would represent the first time since Ray Roberts announced his retirement in 1980 that there will be an open seat in the 4th District. That means lots of candidates will all be chasing local leaders for endorsements at once.

Because the race to replace Rep. Ratcliffe has been predicted to be something of a "free for all," local officials might find themselves with lots of leverage in applying gentle pressure for things they want in exchange for support.

I would not have believed it before the last 60 hours I spent talking to Northeast Texas leaders, but I now think that more than a few mayors, county judges, and other influential people might insist that a candidate make the pledge to keep a good portion of Rep. Ratcliffe's Texas-based staff members.

Indeed, one county judge told me that the staff worked with him so well that he had begun to think of some of them as "real friends." He almost seemed embarrassed to admit it, but this made me realize the depth of support for this obviously hard-working group of people.

Potential candidates for the 4th Congressional District should take note of this because it seems that making this pledge could help them win at least a few early endorsements.

Members are often asked to make many pledges when running for Congress. Many commitments are maintained even if new members later regret making them. Likewise, some promises are not kept after a candidate is elected.

However, it could be that the best way for a candidate to get some key endorsements might be to announce early and loudly that they are going to preserve the careers of as many Texas-based staff of John Ratcliffe that they can.

This could allow the new representative to successfully hit the ground running in Congress while knowing that constituents and other important local elected officials were being well taken care of back home in Texas.