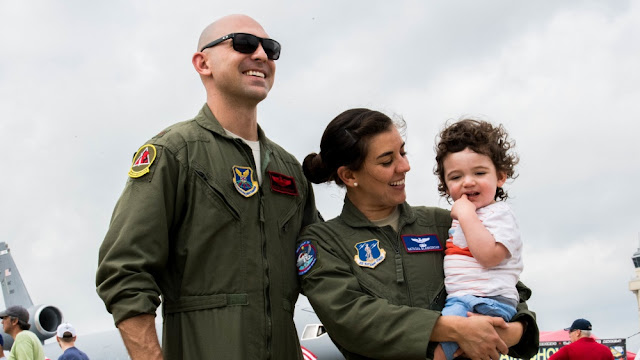 For one Air Force family, a trip to the air show held more significance than just a weekend of entertainment. Airman Jacob Wrightsman explains:

The Barksdale Defenders of Liberty Air and Space Show, brought together over 80,000 families and spectators from the Ark-La-Tex region May 18 and 19, 2019 to witness a full weekend of military and civilian aircraft performances and displays.

With duty stations more than 200 miles apart, Maj. Natasha E. Blankenship, a C-17 Globemaster III pilot with the 183rd Airlift Squadron in Jackson, Mississippi, and her husband, Maj. John R. Blankenship, a B-52 Stratofortress pilot with the 96th Bomb Squadron here, were reunited as Natasha Blankenship flew a C-17 from Jackson into Barksdale to be put on display as part of the air show.

“This is a rare opportunity for us,” John Blankenship said “We don’t really get to see each other fly very often.”

The Blankenships met 10 years ago during pilot training, and have subsequently been married for the past eight years, both sacrificing time together to fulfil their duties to the mission.

“We spent the first four and a half years apart,” John Blankenship said. “Unfortunately, that’s the nature of the business,” Natasha Blankenship added.

Even with the amount of time spent separated, the shared passion of aviation is a commonality that is unique to the pilot couple.

“We both have the joint love of flying,” Natasha Blankenship said. “We both get equally excited about each others job.”

“We speak each other's language when it comes to the job,” John Blankenship added. “There’s definitely a lot of pride that we have in each other.”

“The Iast time we both saw each other on the ramp in our own planes was in Africa. I was deployed to Djibouti and she was deployed to Al Udeid. She picked up a trip and came down and saw me in Djibouti,” John Blankenship said “It was strictly on the ramp, just like today, where she lands, gets off the jet and we go hug and we hadn’t seen each other in months. It was a sweet little reunion.”

With deployments, comes the hardship of being away from family, especially when there is a child involved.

“In his last six-month deployment, John missed so much,” Natasha Blankenship said. “When he (John) left, our child wasn’t doing anything and by the time he got back our son was walking and talking.”

Though being a military family comes with sacrifices, the Blankenships have continued to make it work.

“We do our best, when I’m gone she picks up the slack and when she’s gone I pick up the slack.” John Blankenship said. “It’s kind of like transferring the controls, to use a pilots term.” Natasha Blankenship added.

Driven by the devotion to the job, the Blankenships have chosen to continue the life of service as Natasha Blankenship, a prior active duty pilot who was given the opportunity to leave the military, decided to continue her service in the Mississippi Air National Guard.

“I could’ve left this job, but once you serve it becomes a part of you,” Natasha Blankenship said. “The C-17 is like my old friend, it’s just too hard to leave behind.”

Through the deployments, missions and time apart, the joint love of flying has continued to bring the Blankenships back together, just as they did during Barksdale Defenders of Liberty Air Show.