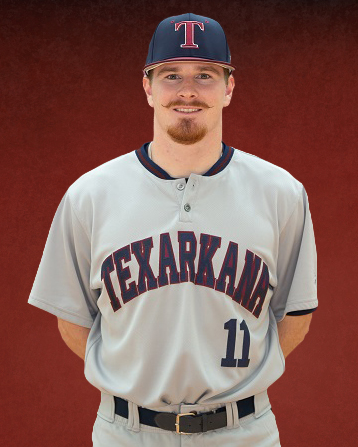 Character matters, and a local baseball star learned that today after receiving a major sports award.

The Red River Athletic Conference announced today that Matthew Barrett of Texas A&M University-Texarkana were selected as the 2018-19 RRAC Betty Etier Character Athlete of the Year.

The female athlete who also received the award was Heidi George of Jarvis Christian College (Texas).

In its third year, the award is given annually to one male and one female RRAC student-athlete who best represent the tenets of the NAIA Champions of Character program (respect, responsibility, integrity, sportsmanship and servant leadership). To be eligible, student-athletes must have been recognized as an RRAC Character Athlete of the Week during the previous academic year. All 2018-19 weekly selections were candidates in voting by the RRAC Champions of Character Committee.

The awards were posthumously named for Betty Etier, who was an NAIA Hall of Famer, RRAC Eligibility Chair for 18 years, and an associate professor and faculty athletics representative at Huston-Tillotson University (Texas). Etier made a lasting impression on everyone involved in the RRAC and helped shape the conference from its beginnings.

Matthew Barrett just completed his final year of eligibility as an outfielder on the A&M-Texarkana baseball team. Barrett, a product of Damonte Ranch High School in Reno, Nev., has managed to balance the demands of being a student-athlete, completing an internship, and serving his campus and community. In addition to his time in the classroom and on the diamond, Matthew completed a full-time internship with Smith-Blair Corporation and held an important seat as a Student Ambassador, assisting the university with campus and community events and fundraisers. His other contributions include distributing shoes to children in the community, working on a home build for Habitat for Humanity, volunteering for Race for the Cure, and assisting with security for the Live United Bowl. Barrett is an Electrical Engineering major with a 3.30 GPA, and plans on pursuing a career in robotic prosthetics to help wounded veterans.

“I think it is a tremendous achievement for Matthew to be recognized as the 2019 Character Athlete of the Year for the Red River Athletic Conference,” said TAMUT head baseball coach Steve Jones. “It makes me very proud as a coach to see a student athlete of Matthew’s character being rewarded for everything that he brought to our program, the conference, and the community. This award exemplifies how truly special Matthew Barrett is and what an ambassador he has been for TAMUT athletics, our university, and the entire Texarkana area.”