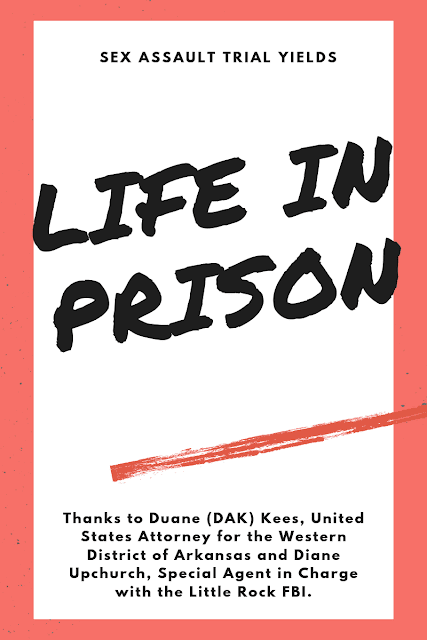 Without a successful appeal, Stanley Rice will spend the rest of his life in federal prison for sexual assault.

Stanley Rice, age 59, of Van Buren, Arkansas, was sentenced today to Life in federal prison without the possibility of parole on two (2) Counts of Transportation of a Minor with Intent to Engage in Criminal Sexual Activity.

The Honorable P.K. Holmes, III presided over the sentencing hearing in the United States District Court in Fort Smith.

According to court records, in February of 2017, a 16-year-old female reported to law enforcement that Rice had been sexually abusing her since she was approximately six years of age.

In particular, the minor disclosed that Rice, on multiple occasions, transported her from Arkansas to the state of Texas, and sexually abused her while there. One specific instance verified by law enforcement involved the sexual abuse of the minor female by Rice when she was 9 years of age.

Additionally, while investigating the case, law enforcement located an adult male, who stated that when he was a minor, Rice likewise sexually abused him. Specifically, the adult male disclosed that when he was approximately 15 years of age, Rice transported him from Arkansas to Texas and performed oral sex on him while there.

“This case is a great reminder of the important work that we do in our office and the great mission that we undertake here to ensure that justice is achieved,” stated Kees. “This is especially true for these victims, who are among the most vulnerable members of our community.”

“Rice’s actions in sexually assaulting minors is incorrigible and it is unimaginable how these individuals felt,” stated Upchurch. “We appreciate the dedicated assistance from the Crawford County Sheriff’s Office and the United States Attorney’s Office for the Western District.”

Rice was indicted by a federal grand jury in August of 2018. In February of 2019, Rice pleaded guilty to transporting both minors from Arkansas to the state of Texas for purposes of sexually abusing them.

This case was investigated by the Crawford County Sheriff’s Office and the FBI. Assistant United States Attorney Carly Marshall prosecuted the case for the United States.


Duane (DAK) Kees, United States Attorney for the Western District of Arkansas and Diane Upchurch, Special Agent in Charge with the Little Rock FBI, announced the sentence and deserve thanks for the successful prosecution.