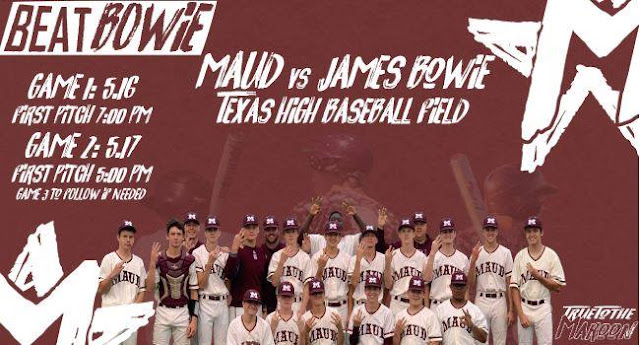 The Maud Cardinals came close to winning Thursday's game against James Bowie in the first playoff game, but they will have the chance to redeem themselves in Game 2 on Friday at 5 p,m at Texas High Baseball Field.

The game had been tied with both teams at 4 until the bottom of the 7th inning.

The final score was 5-4 on Thursday, but the Cardinals' spirit is strong. If the Maud Cardinals can win Game 2, Game 3 will begin approximately 30 minutes after the end of Game 2. This would result in a thrilling win for the team.

Fan's are convinced Maud can win the game tonight, and large numbers are expected for the game.

No doubt there will be lots of prayers in Maud today, and, hopefully, the team will prove victorious after a late Game 3 win tonight.