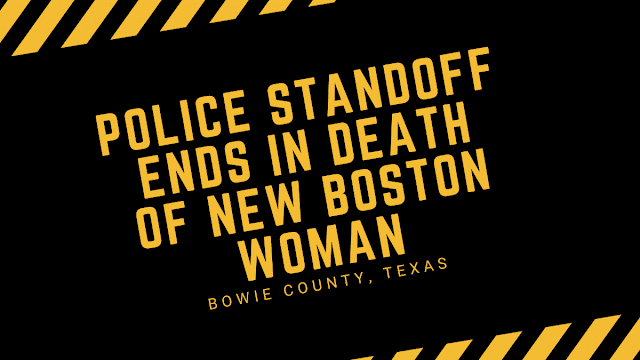 A fatal shooting following a standoff with police occurred in New Boston in the early hours on Friday, May 17, 2019 near the corner of Ellis Street and Center Street in New Boston, Texas.

The Texas Rangers have begun an investigation following the death of a woman identified by police as Elizabeth Harris, age 58, after police were called around 11 pm on Thursday about a person who was allegedly suicidal, according to the New Boston, Texas Police Department.

Following the gunfire exchange, several law enforcement agencies came to the scene and a negotiation began with an expert from the Bowie County Sheriff's Office. The negotiator attempted to get Harris to peacefully surrender to authorities. A couple of additional shots were allegedly fired during negotiations.

NBPD Captain Chris Taillon said —  to the best of his knowledge — New Boston police had not visited the home before.

According to police, Harris allegedly exited the home on the porch around 12:50 am on Friday and allegedly fired a shot or shots at officers on the scene. This led police to return fire, and the situation sadly ended with the death of Harris.

"The lady stepped out and fired a shot towards the officers," Taillon said.

Police on the scene would not say how many officers returned fire citing the Texas Rangers investigation. Officers involved in the incident have been or are being interviewed.

"All area agencies responded," Taillon said. "We would like to thank them."