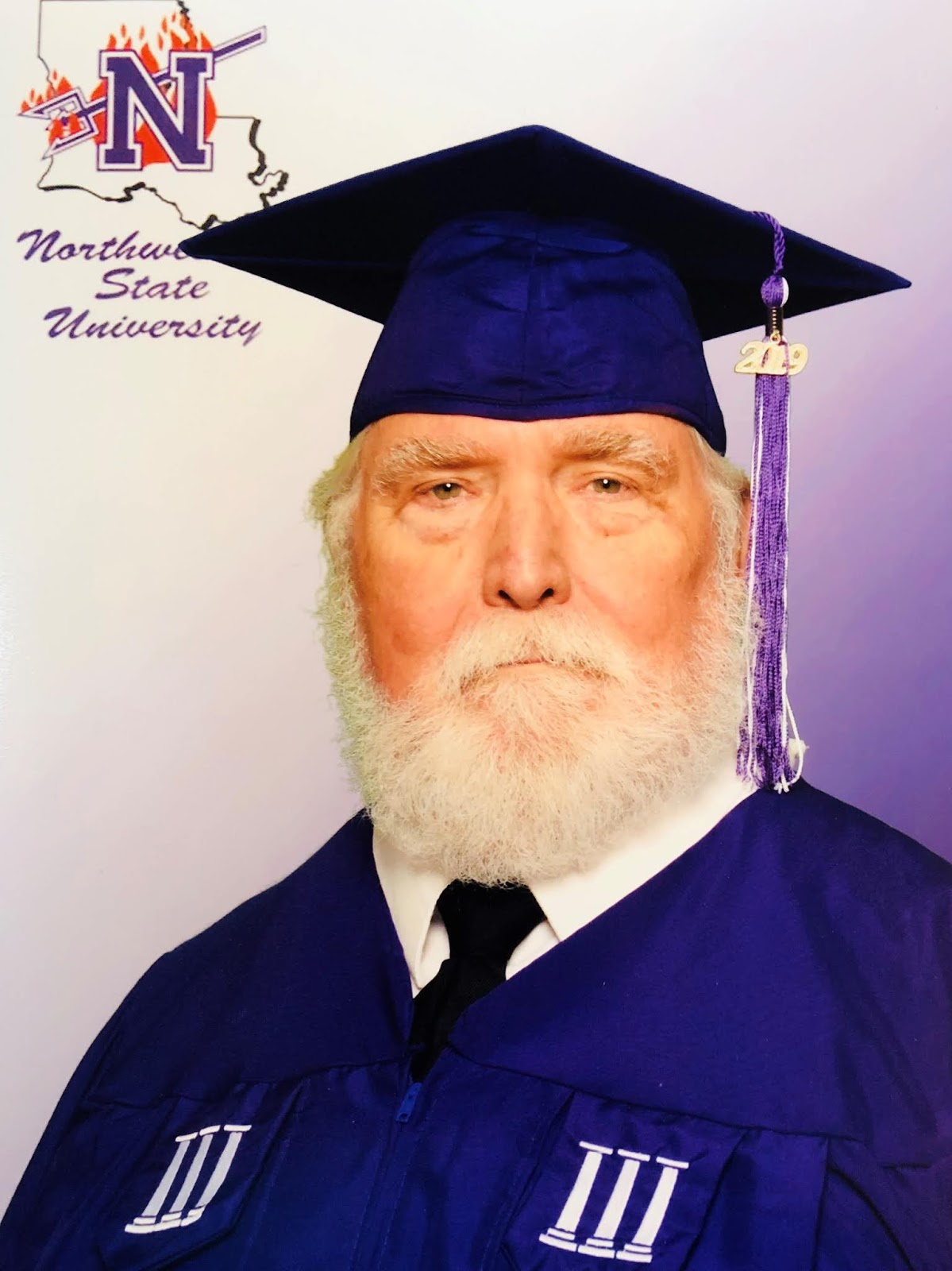 More than 50 years after he left Northwestern State University in Natchitoches to serve the USA, Navy veteran Robert Monroe “Johnny” Hays of Keithville, LA will walk across the stage at Prather Coliseum to receive his associate degree in general studies.

While that is a really huge achievement, Hays and his family will share in the special day with Colby Cranford, his grandson, who is earning a Hospitality Management and Tourism and marketing degree during NSU’s afternoon commencement exercises Friday, May 10.

Isn't it remarkable that grandfather and grandson will receive their degrees on the same day at the same university? This is something that a young Johnny Hays could have never expected when he left his college studies for the military in 1966.

Now 75, Hays is a graduate of Minden High School (1962), and he later enrolled at Northwestern in a pre-med degree program, but he later determined agriculture was his calling.  At the same time, Hays worked his way through college by roughnecking in the oilfield and took mechanical courses.

As graduation approached during the Vietnam War era, Hays began the process of job interviews and found that many interviewers asked about his service in the military.  Hays’ brother, who was four years younger, elected to join the Air Force rather than go to college and Hays decided to enlist in the Navy.

Because he had high ASFAB scores, the Navy’s nuclear power program recruited him. He later volunteered for service on submarines where he was sent to Morocco, Lebanon, Italy, Spain, Malta and other Mediterranean Sea ports.

While in the nuclear power program, he was sent to the U.S. Naval Training Center in Bainbridge, Maryland, where he took courses in chemistry, nuclear physics, calculus, and other courses related to nuclear power plant operations, which were under the direction of Admiral Hyman Rickover, who is widely known as “the father of the nuclear Navy.”

His Naval career continued as he completed procedures and operations secondary school at the Naval Submarine Base New London in Groton, Connecticut.  Hays then served at Pearl Harbor for three years on the USS Flasher, a nuclear fast attack submarine that was deployed to the Gulf of Tonkin. He also attended dive training classes, where he was certified in scuba and hard hat diving.

There were points in his career when he spent over 100 days without seeing sunshine and two Christmases below 600 feet. So after Hays' 1968 marriage to Gloria Calder, he found that sub duty was difficult on family life.  He has three daughters, Donna H. Cranford, Deborah Haysand and Kristy Koch.

After his Navy retirement, Hays returned to the great state of Louisiana and completed  an apprenticeship and a machinist program which allowed him to work as a precision tool and die maker.

The Navy veteran joined the General Motors Shreveport plant maintenance department at in 1981, and he worked there for 28 years. Hays finally retired in 2008. However, he continues to work part-time at a shop in Shreveport repairing various equipment, such as sewing machines, quilting machines and sharpening scissors.

“I’ve had a good life,” Hays said, while anticipating his upcoming graduation - which will include a large number of family members.  He also has another grandson, Dawson Cranford, who is a current NSU students and is involved with the NSU Fishing Team and Kappa Alpha.

There will be two graduation ceremonies: the first at 10 a.m. in the morning and the next one at 3 p.m. in the afternoon on Friday, May 10 at Prather Coliseum.

Graduates include those from the Gallaspy College of Education and Human Development, the Louisiana Scholars’ College and the College of Arts and Sciences with the exception of those receiving degrees in general studies.

Afternoon graduates are those who will receive degrees in general studies along with those receiving degrees from the College of Nursing and Allied Health and the College of Business and Technology.  You can watch both ceremonies live at nsula.edu.