An alleged high school prank involving an alligator that happened years ago at Texas High School in Texarkana threatened to sideline a lawyer who wanted to attend the Supreme Court of Texas (SCOTX) oral arguments held at the school a few months ago in January 2019.

The worried lawyer, who may or may not have been involved in the alleged alligator prank gone wrong, apparently contacted someone associated with SCOTX in a previously unreported incident that caused discussion (and probably laughter) within the chambers of the high court in Austin.

Blake Hawthorne, clerk of the Supreme Court of Texas, reported the unusual incident and indicated that a lawyer who wanted to come to the SCOTX arguments was worried that he "remained under suspicion for the alligator that appeared on campus" when the lawyer was a student at Texas High School.

On Wednesday, January 30, 2019 and Thursday, January 31, 2019, both the Texas and Arkansas Supreme Courts heard arguments in Texarkana. This was a historic event and probably unprecedented. Indeed, The National Center for State Courts said this was the first time "two state supreme courts [held] sessions in a joint appearance," according to SCOTX press liaison Osler McCarthy.

No word on when the prank happened, why the lawyer was still worried about it or if the lawyer decided to attend the SCOTX arguments even while under the toothy cloud of the alligator prank.

However, even if THS or local authorities were still concerned about the incident, it is likely that the statute of limitations is already up on any prank gone wrong, because SCOTX clerk Hawthorne said the person worried about the alligator was a high school student at THS and is now a lawyer. Since the man is now a lawyer, he would have had to complete both an undergraduate college degree and attend law school which often takes seven years.

However, this does not mean the lawyer in question was involved in the alligator's appearance on campus. In fact, anyone who believes they are still under suspicion for this high school prank should be considered innocent until he (or she) confesses to being a Bindi Irwin super-fan or actually laughing during "Crocodile Dundee in Los Angeles." 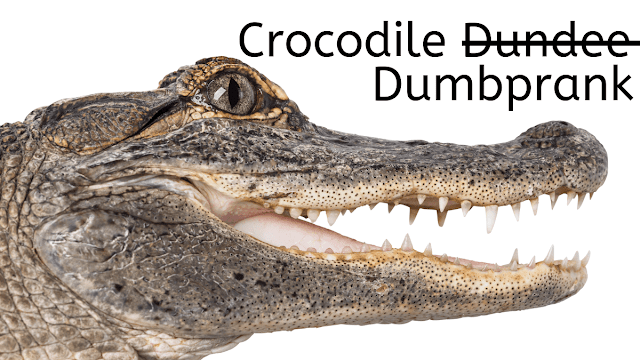