It's a battle of the families in Bowie County Sheriff race 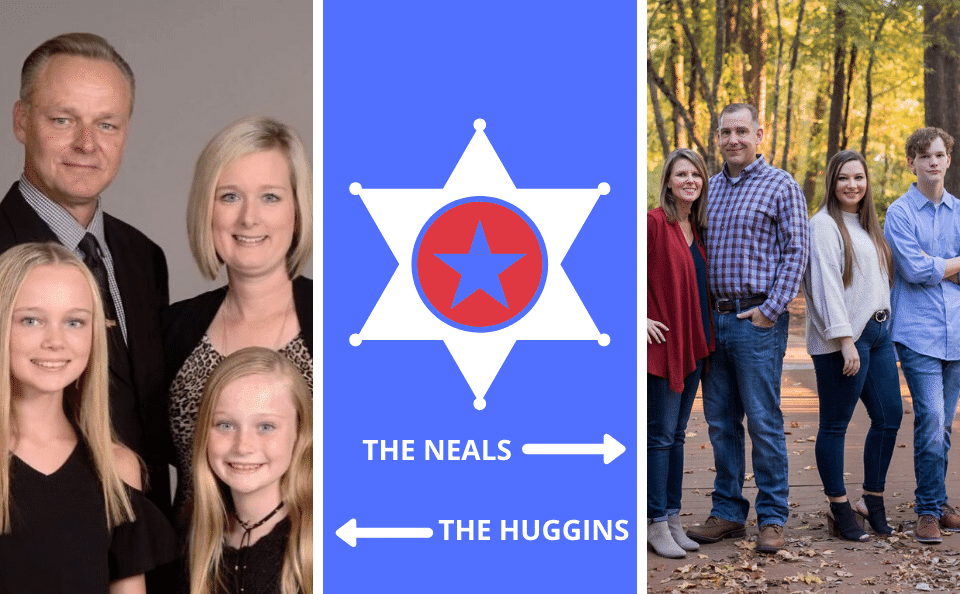 Something kind of interesting is happening in the race for Bowie County Sheriff, and it's something that would make Family Feud host Steve Harvey feel right at home.


In an election twist, the immediate family of candidates George W. Huggins and Jeff Neal are front and center in most campaign materials and especially on their social media accounts.


The contest for Sheriff is highly unusual because it is the first time the office has had an open seat in decades after the announced retirement of Sheriff James Prince.


Safety and "law and order" in Bowie County are definitely on the ballot. Still, the amount of publicity for families of both candidates for Sheriff has seemingly never happened in the living memory of most local citizens.


First of all, let's face it: Both Huggins and Neal have beautiful, all-American families.

Second, the photos from the two campaigns are very different, so citizens will have differing emotions when viewing them.

So how is a voter to judge? And what are the candidates trying to tell us by highlighting their family pictures so prominently?

Chief Deputy Jeff Neal is known in Bowie County for being a lawman in the county for 26 years.

When the public has seen him in his official duties, Neal is either in uniform or wearing a suit.

So it's likely that Neal decided to go with a more casual photo showing his wife, daughter, and son surrounding him to give the public a sense of his more laid-back life outside of the law.

Choosing a natural setting with trees in the background with leaves scattered at the family's feet was a brilliant move. Neal looks youthful and appears confident in a casual way.

In the photo, there is no dispute that Neal's wife, Tiffani, is standing by her man, and this photo definitely illustrates a close and loving relationship.

The candidate's son and daughter are standing to the side and appear to be the type of well brought up offspring voters would expect of a candidate for sheriff.

Daughter Tori is in her second year studying for a doctorate in physical therapy at the University of Central Arkansas, and she recently recorded a video endorsing her father.

The family photo feels "real," and the family members look like they would be the perfect next-door neighbors.

Neal's son, Caleb, is an Eagle Scout and Liberty-Eylau junior. Even his half-smile is perfect for the photo as no one truly believes an average young man his age enjoys family picture day. But it's obvious he's being a good sport about the whole photoshoot.

The females in the photo are the only ones showing a big smile with teeth, and the family pride shines through in both of these women.

In all, the photo succeeds in giving dimension to Jeff Neal, and this photo will provide reassurance to voters wanting to know more about the chief deputy's life.

The family photo shown to the public from George W. Huggins is superb for any candidate vying for a position of authority, especially a sheriff's race.

Looking at Huggins himself, people will notice his chiseled face that could land him a film role as a lawman in virtually any production. Indeed, if the photo was black and white, he would seem like someone who just stepped out of J. Edgar Hoover's office at the FBI in the 1950s.

But there is a juxtaposition to the candidate in the soft facial expression on his wife, Delane. Moreover, she shows just the right amount of Texas attitude with her elbow slightly extended to the side.

Huggins is currently a constable and investigator for the New Boston Police Department, and the general vibe of the photo evokes the feeling of structure and safety.


Just from viewing the photo, a voter might surmise that the Bowie County Sheriff's Office would be run very efficiently, and this is probably no accident from the Huggins' campaign.

The two girls' perfect blond hair could be featured on any shampoo commercial. Their appearance shows very strong attention to detail without being too fussy, which would likely please female voters.

The Huggins' photo showcases a family that appears stable while being warm. From the picture, you could imagine the Huggins' home would be a place most parents would not mind leaving their children for a night or two in emergency situations.


With its prominence as the profile photo of the Huggins for Sheriff campaign Facebook page, the family picture shows Huggins' pride in his wife and young daughters.


Like the Neal's photo, only the females in the picture are showing big smiles with teeth — while Huggins' himself has a more muted but pleasant smile.


All told, the Huggins' family photo is just about perfect in achieving what it sets out to accomplish — which is stability.

Because both families chose photos that play to the strengths of the candidates, neither of the images could be judged "best in the campaign."


Indeed, each one hits the target in showing an added dimension to the candidates that voters would not otherwise know.

"I didn't know George Huggins had two young daughters," someone might say.

Likewise, another voter might feel a strong connection to the warm hug Jeff Neal's wife is giving him among the Northeast Texas trees.

What this really means: Voters who are torn on who to vote for cannot look to the photos to give them much guidance.

So undecided voters will have to go back to those pesky resumes, online interview videos, and candidate forum news articles.

If only the two Bowie County Sheriff candidates could duke it out on Family Feud...

That would be something to see, and it might even break the tie between the candidates in the minds of undecided voters.

The race for Sheriff of Bowie County is on Tuesday, March 3, 2020 - Super Tuesday.