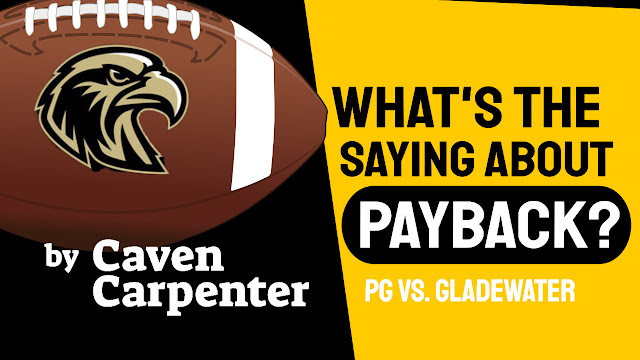 It has been a year-long wait for a Northeast Texas football game that finally happens Friday.

Caven Carpenter tells us what to expect and what's at stake:

So what’s the old saying about payback?  Or revenge is...

The meat grinder, the schedule of doom, or any week in the SEC schedule, continues Friday when Texarkana's Pleasant Grove Hawks visit Gladewater, Texas.

Lose any thought about the Bears being 3A and smaller than the Hawks.  That point was destroyed in last year’s game at Hawk Stadium when the Bears beat the Hawks 44-37.

That game was one of the sloppiest ever played in the Josh Gibson era.  There were too many penalties and turnovers.  Two of those turnovers were returned to the house for six.

But I don’t see that happening this year.

Barring adverse weather (which is possible), the Hawk offense, led by Senior QB Ben Harmon (Dave Campbell’s 4A Cover Boy), RB Bruce Garrett (BYU commit),  OT Connor Stanfill (uncommitted), and WR Sergio Rodriguez (one of the fastest dudes in East Texas) should score and move the ball up and down the field.

Gladewater will look to slow the game down with the run out of the old-fashioned Power I.

Their backs will be big and fast, but that plays into PG’s strength, the defensive line.

The Hawks will look to do the same thing out of the Wing-T, but with Harmon and Rodriguez, the air battle will go to the Hawks.

I can foresee more pass attempts for PG than last week’s game against Atlanta.

The over/under on Sergio touchdowns is 2.5.

THE KEYS TO THE GAME:

If you take your eyes off the ball to watch one player, here is who I will be watching:

1. Look out for the Hawks’ two five star D ends:  #40 Landon Jackson and #44 Marcus Burris.  In three games, no one has blocked them.  They dominate!

2. Keep an eye on #74 Cameron Weekly.  PG’s 310 lb. nose guard will be the key to stopping the inside run.  This is Gladewater’s bread and butter.

3. If Cameron Weekly can do that, it will free up both inside linebackers, #23 Dylan Hopkins and #18 Josh Porchia to make tackles.  This is the key to stop the Power I inside run.

4. If the Hawks can get the Bears into third and long, that’s a massive advantage for PG.

5. Turnovers! If the Hawks have the turnovers like last year, it could be a long night.

6. Speaking of long nights, this should be the shortest game of the year, because both teams rely on the run.  Possessions will be at a minimum, so both sides have to score when they get the chance.

7.  You may not think this is important, but if and when the Hawks punt, watch #52 Reese Foster.  Reese is the deep snapper, and there is no question he is best in school history.


About the author: Caven Carpenter is an avid fan of all things Pleasant Grove and is a former PGISD coach. He was a member of Pleasant Grove's very first graduating class and a player on its first varsity football team. Besides being a self-proclaimed expert on sports, history, music, and movies, Caven is a family man who also loves helping people find the right insurance as a local agent for Texas Farm Bureau.