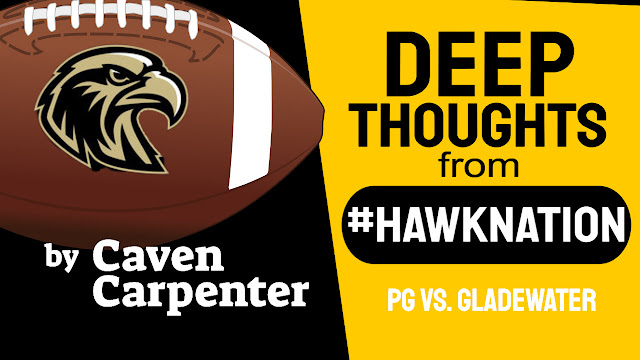 Caven Carpenter tells us what happened and why it matters:

The last time we spoke, I asked you to take your eyes off the ball and focus on one player.

I wanted you to watch how they can impact the game with each play.

Well, to be honest, that’s what a packed visitor-side at Gladewater’s Jack Murphy Stadium did last night!

Close to the end of the first quarter, with the Hawks leading 21- 0, five-star defensive end/tight end Landon Jackson caught a bootleg pass from Ben Harmon and rambled about 15 yards before being tackled out of bounds.

No big deal, BUT HE’S NOT GETTING UP!

As the trainers and coaches rushed over to help #40 up and off the field, pins were dropping all over the visitor side of the stadium, but you couldn’t hear them!

As PG fans remember, last year around this same time, Landon had a season-ending knee injury, and now he is being helped off the field with what appears to be the same injury.

I would like to describe the action that took place in the second quarter, but honestly, I didn’t watch it.

I did what I asked each of you to do, I kept my eye on one player, LANDON JACKSON, and it sure seemed like most Hawk fans did the same thing.

When word filtered out and reached the fans that he was ok, GLORY HALLELUJAH!

The third quarter brought another injury and my eyes focused on one player again: Senior Big Man Jamie Lewis.

Jamie is a dominant, two way player at D and O line and has been for the past three years.  But GLORY HALLELUJAH, word has it that it's not too serious.

It took the Hawks 1 minute and 20 seconds to score their first touchdown, and the drama of the outcome was over.

It’s easy to say the Hawks put on their most dominant performance of the year moving to 4-0 with a 45-0 win.

The one play that got Hawk Nation the most jacked was when Harmon found Marcus Burris on about a 15-yard pass and the 6’5 265-pound tight end outraced the Bears secondary 40 some yards for a TD.

Because the offensive line did its job, Bruce Garrett, Shane Nelson, and Logan Johnson all had big nights running the ball.

Garrett had one touchdown run in the third quarter over 50 yards.

Without question, the Hawks have maybe the BEST FRONT 7 (defensive line and linebackers) at any level in Texas.

Gladewater had no chance to run the ball, and that’s what they do very well.

I laid the over at 2.5 TD’s for Sergio Rodriguez, I came up short. But Sergio did have a pick-six on the first play of the second half that put the Hawks up 31–0.

Maybe the highlight of the night for me was visiting with some new friends I made.  The three Gladewater High kids that were watching the game from their wheelchairs in the endzone.

They were having a great time at the game even though their Bears weren’t doing so hot.

As the PG Showstoppers walked by them, one young man said, “WOW, Y'ALL HAVE THE PRETTIEST GIRLS I’VE EVER SEEN.”  My reply: "yes we do brother!"

Thanks, Chloe Carpenter, Cara Anne Court, and Taylor Hicks for the wave you gave my buddies.

You made their nights!

Sometimes It’s not about the "W."

It’s the little things you learn about people that make Friday nights in Texas incredible!