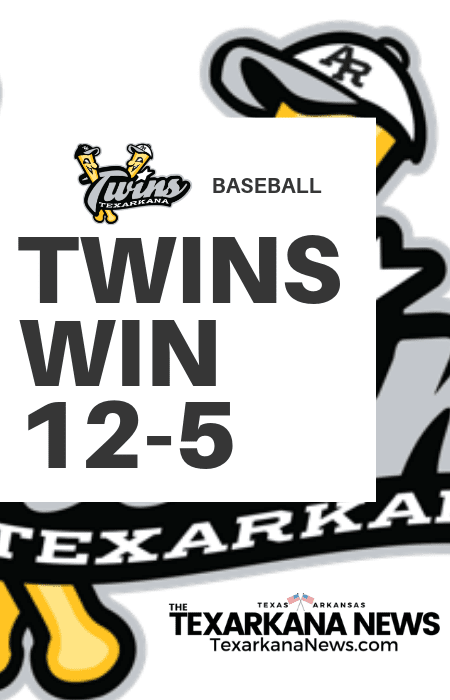 Texarkana Twins batters were hitting on all cylinders Tuesday night as the team scored 12 runs after a slow start to the homestand.

The Twins bats come alive against the Acadiana Cane Cutters on Faith and Family Night. Twins win 12-5 after a night of only scoring one run and not pitching well.

Tonight was Faith and Family night out here at George Dobson Field where the Twins wanted to recognize all the Churches in the area.

Lee Thomas got the start on the mound for the Twins tonight. Thomas was able to pitch 4 innings with two earned runs, one hit allowed, and striking out 3 batters.

Thomas was also able to help on the offensive end with an RBI fielder's choice. The Twins were able to give Thomas a lot of help with the bats.

Scoring three runs in the 3rd inning and four runs in the 4th inning. The Twins were up 7-0 didn’t look back, but the Cane Cutters were able to get some runs back making it 8-5 after the 6th inning.

After the bottom of the 6th where the Cane Cutters were able to pull within 3 runs, Ryne Randle came up to pitch.

He tossed 3 scoreless innings and only allowed 2 hits as the Cane Cutters could not figure out how to get the ball in play. Again, the offense was able to back up the pitcher as the Twins were able to score in the 7th and 8th inning.

When we see the Twins again, it will be Sunday, August 4th for Strikeout cancer night and stay late Sunday.

If you stay after the game, players will be signing balls for those that remain. The Twins also take on the Baton Rouge Rougarou tomorrow.