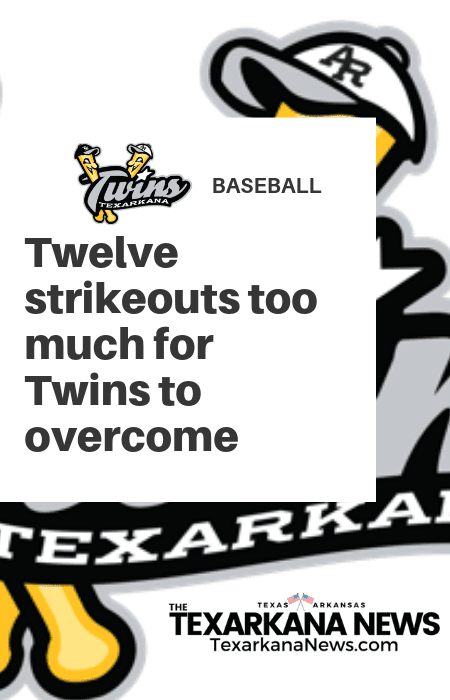 The Texarkana Twins lost a pitching duel with 12 strikeouts at the plate in an away game against the Victoria Generals Wednesday night in the first game of a two-night series.

The Twins (15-14) offense started off sluggish against the General (23-12) and never really found their rhythm. However, the pitching staff looked well-rested and pitched a productive game on the road.

It started with Twins Starter Brian Hamilton who tossed 5 Innings while only allowing 2 Runs and striking out 3.

He could have gone further but trouble in the first and second innings raised his pitch count too quickly for him to pitch more than 5 innings.

However, the Bullpen was ready to go, starting with the Lefty Ram Maldonado. Maldonado was very strong in the sixth but struggled to start the seventh.

That is when lock-down Reliever Joseph Standley stepped took the mound. After allowing one of Maldonado’s runners to score, Standley tossed 2 Innings of sterling relief and keep his 0.00 Season ERA.

However, an excellent pitching performance was not enough as the Twins batters could not seem to wake up.

Strikeouts and missed opportunities plagued the Twins again as they could not seem to get comfortable in the box.

The bright spots of the evening were Ryne Randle and Noah Sifrit both having multi hit games and Christian Boulware’s 2 RBI Double. Boulware pinch hit for starting catcher Jake Walsh with Sifrit and Hudson Hopkins on base with 2 outs.

Boulware worked the count to 2-1 then smoked a ball into the Left-Center gap to bring home both of the Twins runs on the evening.

The Twins will have their chance at revenge today as they finish up this series against the Generals before heading to Youngsville to face the Cane Cutters.

They finally return home on Sunday July 21st to take on the Baton Rouge Rougarou in a 2 game set.