Home Congress News Politics Rockwall Texas State Sen. Bob Hall might want to be the third Congressman in a row from Rockwall County

State Sen. Bob Hall might want to be the third Congressman in a row from Rockwall County 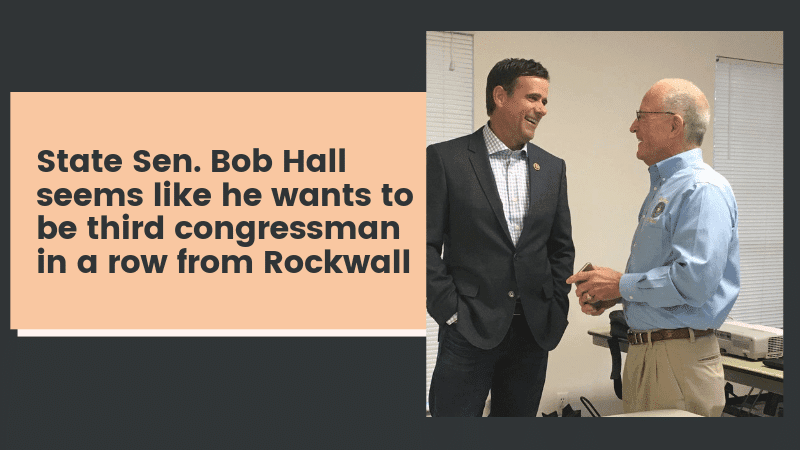 Since 1981, the 4th Congressional District has been represented by a congressman from Rockwall County.

Now, State Sen. Bob Hall wants to extend the streak as he is seriously considering a race for Congress to replace Rep. John Ratcliffe who has been tapped by President Trump to be the new Director of National Intelligence.

Having the last name of "Hall" can only benefit any candidate since the beloved Ralph Hall was the representative for the Fourth District for about 34 years.

Today, the state senator responded directly to our questions about his candidacy with a written statement.

Hall says he has been humbled by the "widespread support" he has received, and he says constituents are encouraging him to run for Congress "should Congressman Ratcliffe be confirmed."

Hall said he was the most conservative senator in the state of Texas and that he would be a "natural fit" to continue the legacy of John Ratcliffe and Ralph Hall.

He also asked citizens to pray for him and his family as he decides his role in the race.

One warning sign for Sen. Hall's candidacy could be his somewhat weak support in the Republican primary in 2018. As the incumbent, he only won 53% of the vote against fellow Republican Cindy Burkett who received more than 46% of the vote.

Nevertheless, Sen. Hall has seemed to gain popularity in the district, and he was given the chairmanship of the powerful agriculture committee in January 2019.

However, running for Congress would be a no-lose proposition for Sen. Hall as he would definitely keep his Senate seat and is not up for re-election in 2020.