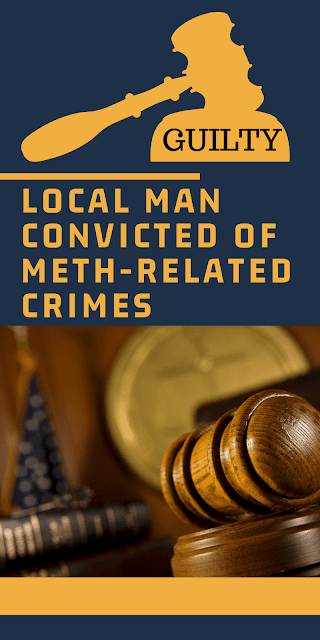 Winfred Earl Ware, Jr. was found guilty by a jury on June 28, 2019, of conspiracy to possess with intent to distribute methamphetamine, obstruction of justice and witness tampering following a two-week trial before U.S. District Judge Marcia A. Crone.

According to information presented in court, from 2014 through 2017, Ware conspired with others to possess with the intent to distribute 50 grams or more of methamphetamine.

The evidence presented in trial showed that pending trial for the drug conspiracy charge in August 2018, Ware created false Facebook entries purported to be from a government witness which would tend to exonerate the defendant.

By submitting those false documents to the court to be used at trial, the government had to dismiss the pending drug charge against Ware to investigate these messages.

Upon examination, the government determined that the Facebook entries were created by Ware in an effort to influence the testimony of several witnesses in the original trial and to corruptly influence the due administration of justice.

Ware was then indicted in Dec. 2018, on the original drug conspiracy as well as the charges of obstruction of justice and witness tampering.

The maximum statutory sentences prescribed by Congress is provided here for information purposes, as the sentence will be determined by the court based on the advisory sentencing guidelines and other statutory factors.

A sentencing hearing will be scheduled after the completion of a presentence investigation by the U.S. Probation Office. The conviction was announced U.S. Attorney Joseph D. Brown today.

This case was investigated by the Bureau of Alcohol, Tobacco, Firearms, and Explosives, the Federal Bureau of Investigation, and the Panola County Sheriff’s Office.  This case was prosecuted by Assistant U.S. Attorneys Lauren Gaston and Michelle S. Englade.