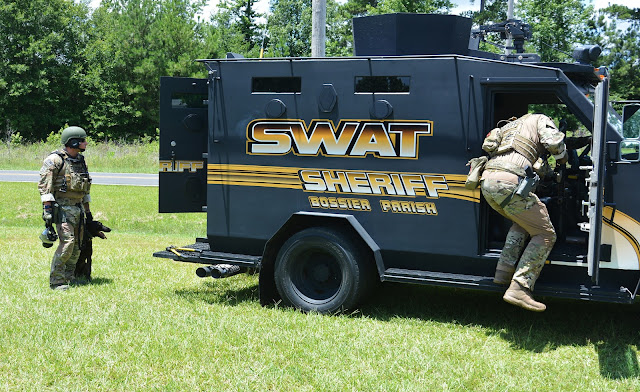 Michael Romesburg, 39, of the 100 block of Green Park Lane in Haughton, was arrested and charged with Aggravated Assault with a Firearm, as well as a fugitive warrant out of Red River Parish Sheriff’s Office.

Around noon today, Bossier Sheriff’s Office deputies responded to a call in which Romesburg had threatened his brother with a firearm at his nearby residence on Green Park Lane.  Romesburg then went back to his own residence where he barricaded himself.

Because of the threatening behavior of Romesburg and him barricading himself in his residence with a firearm, the Bossier SWAT team and K-9 team deployed to the scene.

SWAT, K-9, and Crisis Negotiation Team members deployed to Romesburg’s residence in an effort to peacefully have him surrender.

Just a short time later, Romesburg exited the back door and quickly gave up after he noticed the influx of Bossier deputies and K-9 “Spike,” who then made a civil apprehension without having a challenge or bite.

“Once again, our entire team did an excellent job in capturing this suspect,” said Sheriff Whittington. “When you go into these types of volatile situations, you have to be prepared for the worst. Fortunately, no one was hurt, and the suspect is now behind bars.”
Romesburg was transported to the Bossier Sheriff’s detective’s office for further questioning before being transported to the Bossier Maximum Security Facility for booking, where he faces a $25,000 bond.

Photo (top of page) Bossier SWAT, K-9, and Crisis Negotiation Team members quickly deployed to the suspect’s residence on Green Park Lane in an effort to peacefully have him surrender.