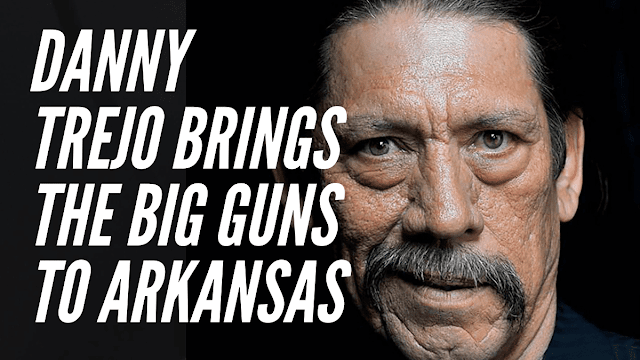 Hot Springs is already planning for their hugely popular 2020 St. Patrick's Day Parade, and they are bringing in the big guns.

Actor Danny Trejo will be the official starter for the First Ever 17th Annual World’s Shortest St. Patrick’s Day Parade in downtown Hot Springs on March 17, 2020.

Trejo (pronounced TRAY-ho) is the world-famous bad man of countless movies and television shows as well as the character known as Machete, avenging good-guy star of the “Machete” series of hit movies.

“With Danny Trejo as our official starter, that ought to scare off all the pretenders to the title of World’s Shortest St. Patrick’s Day Parade,” said Steve Arrison, CEO of Visit Hot Springs and one of the creators of the world-famous little parade along 98-foot Bridge Street in downtown Hot Springs. “If they insist that their pseudo-parades are shortest, we will just email them a photo of Mister Trejo, and that should be enough to change their minds.”

The parade, which began in 2003, annually attracts upwards of 30,000 people to the city’s historic downtown district. The parade is immensely popular, with its insanely zany collection of marchers, strutters, dancers, waddlers and floats that cover the 98-foot length of Bridge Street in the heart of downtown Hot Springs.

Danny Trejo developed a prolific career in the entertainment industry with a hard-earned and atypical road to success. From years of imprisonment to helping youths battle drug addictions, from acting to producing, and now on to restaurant ventures, Trejo’s name, face, and achievements are well recognized in Hollywood and beyond.

“I love playing the bad guy in movies, because the bad guy always dies,” Trejo said. “That’s the real world. If someone asked me to play a bad guy that always gets away with it, I’d pass. That’s the very message I preach to youths who are in crisis and in trouble: The bad guy always loses and the good guy always wins. It’s the one thing movies and real life see eye-to-eye on.”

Trejo grew up on the streets of Los Angeles. Despite spending the latter part of his early adulthood incarcerated, he has worked hard to maintain a drug-free and positive lifestyle, and he celebrates over 50 years of sobriety. On his release from Soledad Prison, he became involved in programs aimed at helping those who, like him, battled drug and alcohol addictions.

Years into his journey as a drug and alcohol counselor, Trejo visited the set of the movie “Runaway Train” to offer support to a man he’d been counseling. On arrival at the set, Trejo was immediately offered a role as a convict.

Since then, he has gone on to star in dozens of films including “Desperado,” “Heat” (Robert de Niro, Al Pacino), the “From Dusk to Dawn” film series, “Con Air” (Nicolas Cage), “Once Upon a Time in Mexico” (Johnny Depp), and the “Spy Kids” movies.

An appearance in Robert Rodriguez and Quentin Tarantino’s “Grindhouse” led to a spin-off movie based on the original trailers called, “Machete,” in which Trejo plays an ex-federale with a gift for wielding a blade.

The success of “Machete” spawned a sequel, “Machete Kills,” which boasts a star-studded cast, including Mel Gibson, Charlie Sheen and Amber Heard. Trejo then co-starred in “Death Race: Inferno,” in which he reprised his role as Goldberg from “Death Race 2”.

On television, Trejo reunited with Robert Rodriguez for Miramax’s “From Dusk Till Dawn: The Series”. He held recurring roles on “Sons of Anarchy” and “King of the Hill,” “Breaking Bad” and “The Flash” and has been featured in episodes of “Blue Bloods,” “What We Do in the Shadows,” “Brooklyn Nine-Nine” and “Kidding.”