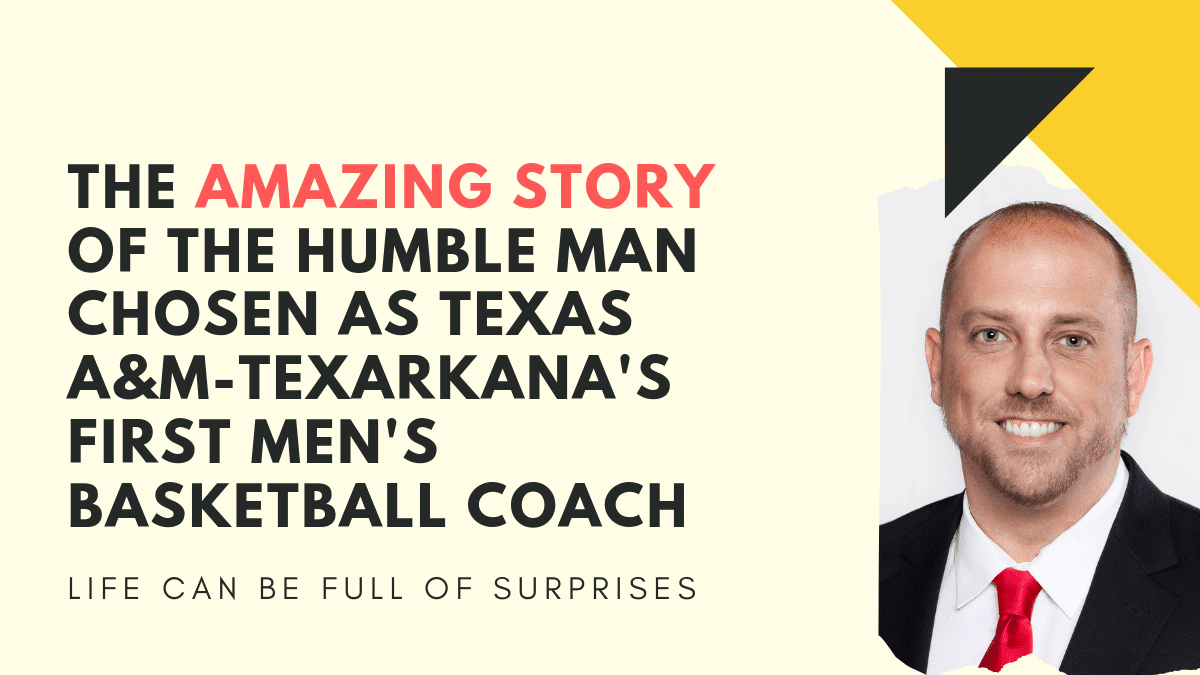 They say life can be full of surprises. Indeed, the long and winding road leading to the announcement that Ryan Wall will become the first head coach of Texas A&M-Texarkana's men's basketball team is both interesting and inspirational.

A little over a year ago, Ryan Wall had just come out of five years of coaching after resigning as the men's basketball coach of San Antonio's Our Lady of the Lake University in mid-March 2018.

Right before he left OLLU, Wall had an enviable life — one that most young men would only dream of having while growing up.

He was a very successful coach with a 106-45 record. Not only that, he had a loving wife, a beautiful daughter and another baby girl on the way.

Wall had become the head coach of the OLLU Saints beginning in the 2013-2014 season after serving as the assistant coach during 2012-2013.

His tenure at OLLU produced solid accomplishments including five winning seasons, a tie for the Red River Athletic Conference title and five appearances in the conference tournament.

Coach Wall was a beloved figure at OLLU, and the university had hosted both the Ryan Wall Basketball Camp in the summer and Ryan Wall's Shooting Camp in the winter.
Nevertheless, with a new baby on the way, Ryan Wall walked away from coaching — a job which he obviously loved with every fiber in his being.

That wasn't the only surprise Wall had in store for colleagues, family and friends, because he announced that he had decided to become a real estate agent in the hot real estate market where he already lived: San Antonio

Several weeks passed and beautiful baby Rylee Nicole was born in late summer 2018. A few weeks later, Wall had even more big news: he found out he had passed his real estate exam after two months of hard work on August 20, 2018.

"I'm excited for my next chapter in my life," he wrote to family and friends in a social media post. "Now [it's] time to get to work."

Wall was obviously ready for success. At the time, he said he wanted to help families find "exactly" what they wanted in a new home and that he would always work in the best interest of his clients.

Of course, everyone who knows him believed that 100% as Wall had always seemed to go out of his way to care for people wherever he went.

The coach went on to explain his major career change: "It was all about my kids (even though they hated 33s) that I coached and their families the past 8 years," he wrote. "It was helping those kids get a degree and win a LOT of games, and now it's about finding ALL families a HOME."

He also offered special thanks to his wife: "Thank you Krysti Wall for helping me study every day... also for supporting me going into real estate. I love you with everything."

Coach Wall had played college basketball at the University of New Mexico but transferred to play at Texas Christian University where he met Krysti — who became his teammate in life along with daughters Kendall and Rylee.

As a basketball player, Wall had learned to hustle, and it's obvious he didn't waste any time in real estate, either. That's because he quickly earned the Top Achiever award less than 3 months after joining RE/MAX Realty Advantage in San Antonio.

Nevertheless, it is easy to discern from his writing during this time that basketball and coaching were never far from his mind — even though he was having success as a real estate agent.

The seemingly endless round of social media posts congratulating former colleagues and rivals on new coaching positions could have led anyone in Wall's position to feel somewhat of a longing desire to get back into the game.

Certainly, Wall knew he had the skills to be a great college coach  — he'd already proven that. But there must have been some apprehension regarding a career move back to coaching when he was already becoming successful in real estate.

In February, 2019, things were going so well that Wall was even nominated for RE/MAX Realty Advantage agent of the month.
He was also still helping people and getting accolades for it. Indeed, RE/MAX reported Wall's good deeds to all of San Antonio. They wrote: "Just today, Ryan went and picked up a stranded agent that had some car trouble," RE/MAX Realty Advantage wrote. "Ryan is always willing to help other agents and is a highly valued member of our team."

Still, it was obvious that basketball and coaching remained close to the front of his mind.

But, of course, Wall never expected that he would soon be head coach of the men's basketball team on a campus of one of Texas' most beloved educational institutions: The Texas A&M University System.

And Wall had applied for the job the first time around.

Soon, however, people were buzzing about a possible opening at A&M-Texarkana, because Goar was pursuing other opportunities and would not be taking the Eagles job.

About a week ago, Wall posted a photo that included a bold quote which gives a lot of insight into the way he approached landing the job of Eagles coach the second time. It read: "I will fight for it. I will not give up. I will reach my goal. Absolutely nothing will stop me."

As it turned out, "absolutely nothing" did stop him. Less than 48 hours after Wall posted the quote, HoopDirt.com reported that: "Ryan Wall has been hired to replace Goar."

And just a few hours ago, the new coach poured his heart and soul into a social media post that showed just how grateful he was to get a second chance at coaching.

He wrote: "I want to start by saying thank you GOD for answering my prayers. I am very humbled and thankful for this opportunity."

Wall then went on to tell his wife that she is the best thing that ever happened to him.

"Thank you, Krysti, for allowing me to coach college basketball," he wrote.

After that, he went on to methodically thank all his former coaches and basketball mentors in a truly passionate and personal social media post that shows true sincerity.

Wall's long and public thank-you note puts everything on the table. The entirety of achieving a major life goal is right there in his gratitude to everyone who helped him along the way.

You see, Ryan Wall needed this job with the Eagles. Coaching is what he was meant to do with his life.

But, from the beginning, Texas A&M-Texarkana needed Ryan Wall, too — even if they really didn't know it when they first hired someone else over Wall and other qualified candidates.

That's because over the last year, Wall had the best training course for establishing a new men's basketball program that anyone could ever hope for — starting a totally new career from scratch and becoming a success.

In addition, there is a constant theme over the past year in Ryan Wall's life. From becoming a real estate agent to his new baby, there is one word that he may have said more times over the past 12 months than any other.

It all comes back to what Wall said when he started in real estate in August, 2018. "It's about finding ALL families a HOME," he wrote.

Now, Ryan Wall is getting a chance to help men's basketball find a home at A&M-Texarkana, and it's a job he could have never imagined twelve months ago.

He will be building the program one nail at a time — just like he and Krysti did while volunteering with construction in San Antonio for Habitat for Humanity.

What does this mean for men's basketball in Texarkana?

It indicates that Texas A&M-Texarkana hired a grown-up and a man who finds a problem and figures out a way to solve it.

The university found a coach who doesn't need to seek the easiest way to achieve success — but the best way.

It also means that Texas A&M-Texarkana has an inclusive coach who helps people and wants to truly find a place for everyone on his team by encouraging them to further develop their individual strengths.

The word "home" does not mean the same thing to everyone. However, it's likely that a humble and hardworking coach like Ryan Wall will find the home he's looking for in the new Texarkana program.

And Texas A&M-Texarkana is certainly lucky that they found a coach who knows how to build a home himself.


About the author: J. Jones is a graduate of the Walter J. Lemke Department of Journalism at the University of Arkansas. His articles have appeared in a few hundred newspapers in the United States, including some of the largest newspapers in America (USA Today and the Chicago Sun-Times) and smallest ones while covering state elections as a young reporter. He has been a proud Northeast Texas and Ark-La-Tex resident since his childhood. 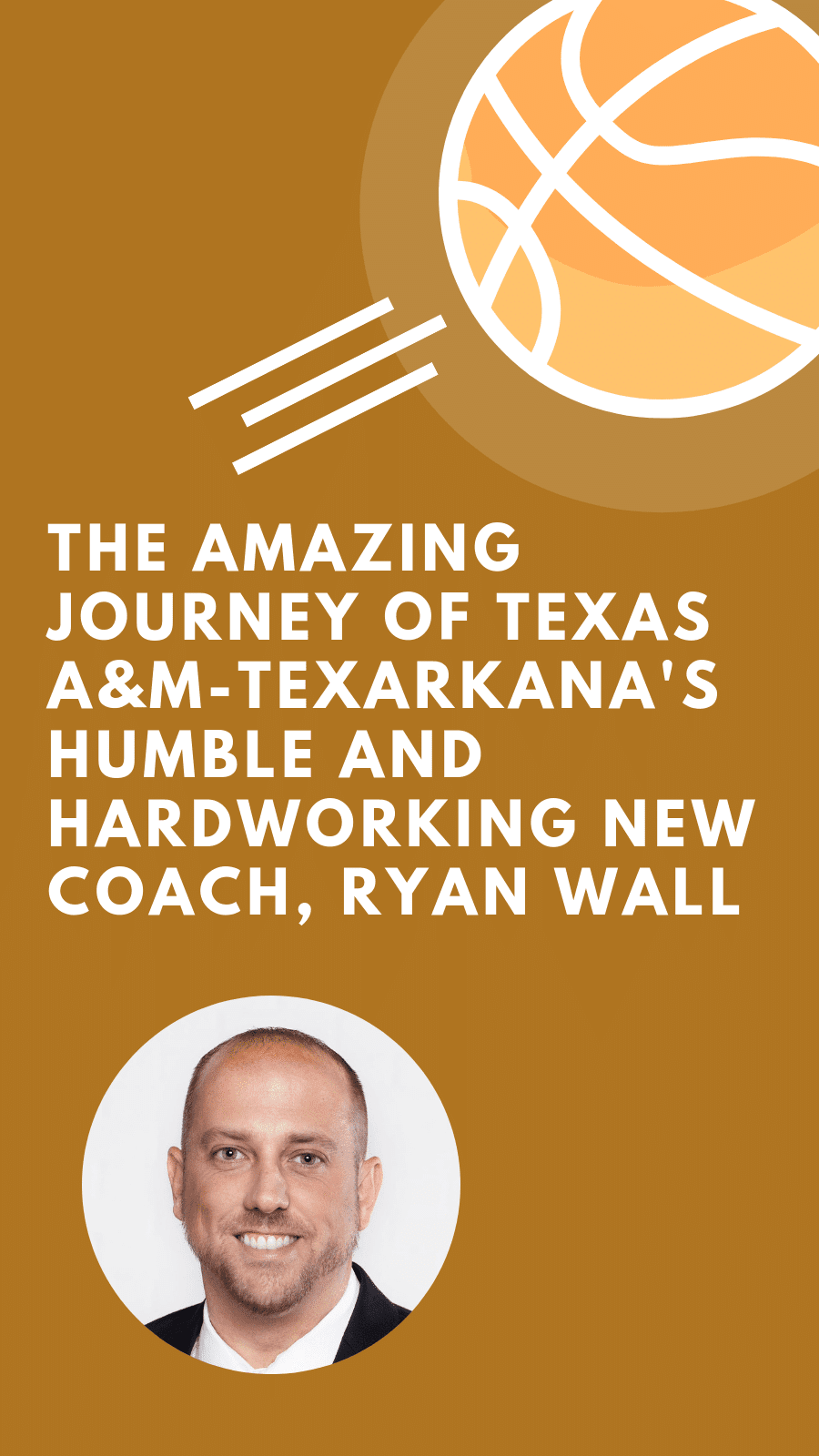