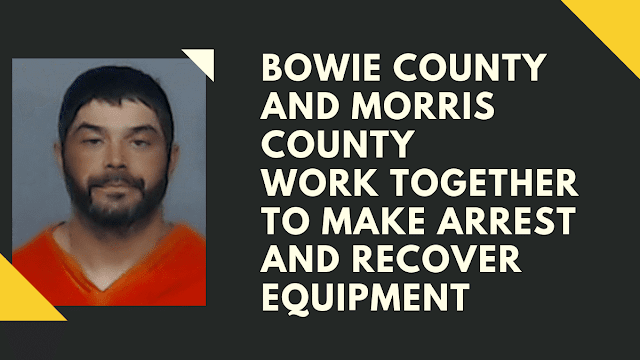 Equipment stolen from a Bowie County citizen was recovered in a joint police operation between Morris County and Bowie County, according to the Bowie County Sheriff's Office.

All of the pieces were stolen in December of 2018 and were part of an extensive list of property taken from Anthony Cooper. A prior press release for case B18-03171 had been disseminated in hopes of recovering the property. Investigator Biggar spoke with the Morris County property owner regarding the stolen equipment.

He was identified as Justin Paul Cobb, white male, DOB 7-3-1982. His explanation for possessing the stolen equipment was not credible, according to police.

The following pieces of equipment were recovered and returned to the rightful owner:
Total value of property recovered-$86,000.00 Morris County and Bowie County Investigators recovered the above items along with numerous other pieces of equipment that had been reported stolen from surrounding jurisdictions.