Heart and Soul: One Nation, One Community with a feature-length PG film on the way 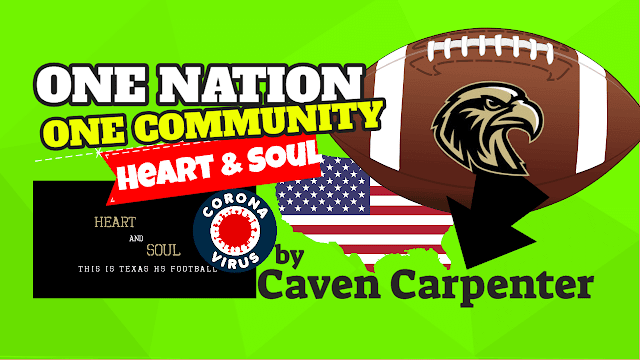 Family life amidst a "Shelter in Place" order is not easy for anyone. But columnist Caven Carpenter tells us hope is just around the corner as he discusses the new documentary film about the PG Hawks and reminds us of American sacrifices from the past:

Still today, these essential dates define us as a nation and illustrate the resolve of a people determined to overcome anything that is thrust upon us.


Even Admiral Yamamoto realized this after the Japanese Navy attacked Pearl Harbor: “I feel all we have done is awaken a sleeping giant and filled him with a terrible resolve,” the admiral famously said.

So how, you might ask, can one compare a worldwide pandemic to the release of Texarkana Gameday’s documentary “Heart and Soul" — the feature-length film which gives us an inside look into the 2019 Pleasant Grove Hawks football season?

The answer is: YOU CAN’T!

Couldn't have come at a better time

On Sunday, at 7:30 pm, Texarkana Gameday will release its documentary “Heart and Soul: This is Texas Football."

With the spread of the coronavirus, our lives have been turned upside down. So we all could use a bit of happiness right now.

There are so many things that this Hawk fan can’t wait to see in the documentary.

I hope you all have your favorite memories also.  But, first, I want to discuss our great country, our great community, and how this global pandemic has stolen so many things we hold dear.

Americans have always pulled together

Some spoiled Americans lose their minds when toilet paper disappears from the grocery store.

But can you imagine going to Walmart when there was no meat, flour, sugar, eggs, or milk? And there was no truck coming in the morning to bring them?

This period proved that Americans are both tough and resilient when they work together to overcome hard times.

During World War II, staples such as flour, sugar, bacon, and coffee were rationed to feed our troops overseas.

An amazing thing happened: Neighbors and communities came together to help each other.  And they shared what they had by giving to those who had nothing.

Our hardworking ancestors planted neighborhood gardens and shared the work and the harvest.

American industry also rose to the occasion: From 1942 to 1945, Ford and General Motors stopped making cars and made bombers, tanks, and military vehicles. A vast factory in Waterbury, Connecticut, that previously made toy airplanes, lipstick holders, alarm clocks, and cocktail shakers converted to wartime production was transformed into a factory that made cartridge clips, mortar shells, and small-caliber bullets.  That factory produced over 50 million cartridge clips!

That vividly illustrates that when Americans in every community come together and make some short term sacrifices, wars can be won — and deadly viruses can be eradicated!

All of us have watched the stories from around the US and the world about how this pandemic has put the brakes on our lives.

But we don’t have to look far to see the impact in our own homes and schools.

Some of our children are even being brought to tears. And there seems to be nothing we can do to make the situation better. That's because we, as parents, can only be there for comfort and support.

My high school senior daughter and PG Showstopper, Chloe Carpenter, is like most school-aged young people in our area.

She has had a tough few weeks.

With tears in my eyes as I type this, I knew Chloe had three goals this Spring: 1) Drill Team competition, 2) Spring Show, and 3) Graduation. In fact, my daughter has had a goal since early middle school to give a graduation speech at her church. But, today, within a week of each other, seems to be gone.

Another senior PG Hawk comes to mind during this harsh situation. That young man is Jackson Cobb.

It has been a tough senior year for Jackson.

He tore his ACL during the first half of the first game of the football season against Paris.

Jackson literally worked his butt off to get healthy so he could lead the Hawk baseball team and be ready for his freshman year playing for the University of Arkansas.

I asked Jackson how he was feeling during this shutdown: "My attitude is relaxed," Jackson said. "I just hope we get to go back to school and finish baseball.”

He added: “I’m hitting and throwing as much as I can, and running every day to get my knee as strong as possible.”

You can bet the Hogs are getting a great kid and great player in Jackson Cobb!

Future Henderson State Reddie and senior softball star, Bre Jones, is also missing being on the field and at school.

“I’m definitely doing my best to stay positive and trying to keep a smile on my face, but I really miss school, my teachers, and classmates,” Bre said.

For all of you who have not seen Bre smile, I can tell you it’s BEAUTIFUL!

My daughter, Chloe, and her friends Cara Anne Court, and Georgia Cobb, told me two things they miss: School and freedom.

“We miss the freedom to go where we want and see our friends,” the trio said.  All three young Pleasant Grove seniors agreed that they miss school and want to finish senior year.

Parents, I guess we have succeeded when our kids really and truly miss their school and teachers.

Morgan Smith and Texarkana Gameday are debuting the long-awaited documentary "Heart and Soul: This is Texas Football" about the 2019 State Champion Pleasant Grove Hawks.

As I mentioned earlier, it couldn’t come at a better time.

While we are dealing with the "Shelter in Place" order for Bowie County, it is a great time to re-live the magic of the 2019 Hawk football season.

Morgan Smith tells me the film will last about an hour and twenty minutes.

By the way, whatever you do, don’t miss the ending.

My 9 favorite moments of the 2019 season

1. The Watermelon Supper:  The band, cheerleaders, Showstoppers, girls volleyball team, and the football team all had a sparkle in their eyes that indicated 2019-2020 was going to be an excellent year for the Hawks.  The hype video made by Texarkana Gameday made this columnist want to suit up!

2. The Paris Game:  From my seat in the press box, it was hard for me to see Jackson Cobb get hurt. When he came to the sideline, I knew it was terrible!  My heart broke for this kid who had put his "Heart and Soul" into this team. But in an instant, it was over. When I saw his dad, Mike, hug him on the training table, my eyes filled with tears.

3. The marathon game in Tyler Chapel Hill:  Do you remember how long that game lasted? I guess it’s a good problem to have when you know you are going to win by 40 points (and you just want to get out of there healthy).  With their cheap shots and the clock keeper not running the time off, this Hawk fan was a nervous wreck.

4. THE GAME:  I arrived at Hawk Stadium at 4:20 pm to prepare the press box, and there was already a line of Carthage fans all the way to the tennis courts!  Old Hawk fans, would you ever in your wildest dreams believe that is possible? For Homecoming, I got to walk my beautiful daughter, Chloe Lane Carpenter, across the field. It was "Friday Night Lights" at it’s best — with two great teams and coaching staffs.  I remember the great plays by the defensive line and the excellent running of Bruce Garrett.  The Hawks may have lost, but I realized then that we would win our second ring in December.

5. The Rain Game:  The rain at Liberty-Eylau made the game sloppy and not very enjoyable.  When Connor Stanfill tore his ACL in the first half, the night had an eerie feeling.  I can only speak for my crew, but we just wanted to get it over with and go home. Trust me, there were tears in the stands when Quinn Stanfill and Irene Stanfill consoled Connor on that table.

6. Lobo Stadium: There is nothing better in Texas high school football than a playoff game in December at Longview Lobo Stadium!  It was standing room only, and the Hawks were dominant against rival Gilmer.  KJ Hicks and Nick Martin put on a great show.

8. Third and long:  Ben Harmon showed his greatness. With the game still close, and the Hawks facing third and long on their own 30-yard line, Ben drops back to pass. But with nobody open, he tucked it and ran for the first down.  With that one play, the momentum changed from the Greenwood sideline to the Hawks sideline.  PG would never let them get it back.

9. THE CHAMPIONSHIP GAME:  What a start with KJ Hicks running back the opening kickoff!  Bruce Garrett couldn’t be stopped, and the Hawks defense was beyond exceptional. There was a buzz in AT&T Stadium that something was wrong with Ben Harmon. But he was doing what he has been doing for three years... And that’s lead.

Helpful suggestions for the Shelter in Place order

I can’t mention them all, but here are a few of my favorites:
➼ Flying Burger — Fast, clean, and fantastic service.  They have my favorite fish in town.
➼ Wing Stop (Richmond Road) —  The fries and the Ranch.
➼ Gusanos — Great Chicago style pizza, great salads, and great sandwiches.
➼ Amigo Juan — Great service and great food.
➼ Loca Luna —  They have great family deals going on right now.


WHAT TO BINGE WATCH:

For those of you NOT watching "Tiger King," here are a few suggestions to brighten your day, and maybe learn more about our great country.

➼  Best in Show —  When this virus is over, you can give me a big hug for suggesting this.  Trust Me!
➼ The Producers (1967) — Yes, old movies can be funny.
➼ Curb Your Enthusiasm (HBO series) — If you liked Seinfeld, you will love this. Don’t watch it with your children.
➼ The Graduate — Yes, it’s a comedy, but it's a dark comedy.

MY TOP 5 MOVIES OF ALL TIME:

LEARN SOMETHING WHILE YOU’RE ON LOCKDOWN:

⦿ Documentaries by Ken Burns.  The War, The Vietnam War, Baseball, and Country Music.
⦿ The Pharmacist (on Netflix).

Keep your heads up, This too shall pass!

This is to Ben Harmon and Sergio Rodriguez: I will give you $50 each... but there's a catch.  WHEN and DURING graduation at Hawk Stadium, Ben must stand up and throw Sergio a perfect spiral for one last time when Sergio's name is announced (and he is walking across the stage).

About the author: Caven Carpenter is an avid fan of all things Pleasant Grove and is a former PGISD coach. He was a member of Pleasant Grove's very first graduating class and a player on its first varsity football team. Besides being a self-proclaimed expert on sports, history, music, and movie, Caven is also a proud family man.