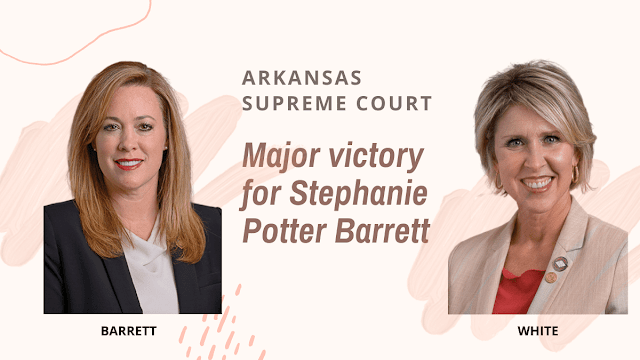 It's a good day to be Stephanie Potter Barrett.


The Prosecuting Attorney from Texarkana, Arkansas scored a significant win Thursday over Judge Emily White as the Arkansas Supreme Court sided with her on a crucial issue in the race to become an appeals court judge.


The state's High Court ruled unanimously that District Judge Emily White could not use her title "Judge" on the ballot in the non-partisan race for Court of Appeals Associate Judge in District 4, Position 2 on March 3 because she was appointed by Gov. Asa Hutchinson.

If White had been elected to the position, she could use the title. Barrett will be able to use her title and will be listed as "Prosecuting Attorney Stephanie Potter Barrett" on the ballot.

White will be listed as merely "Emily White" on the ballot and not "Judge Emily White," as the Secretary of State had previously confirmed.

Barrett had also taken issue with White's use of her maiden name instead of her married name of "Legenfeld," her residency within the district and Judge White's use of the title "Judge" and maiden name to obtain voter signatures. These arguments were dismissed by the trial court and the Supreme Court agreed.

However, Prosecuting Attorney Barrett won the central issue of disagreement with White over her using the title of "Judge."

Today's Arkansas Supreme Court ruling means that this non-partisan judicial race will become one of the most hotly contested races in the state.

The legal win is also a significant success for Barrett's Texarkana legal team: Josh Potter and Jacob Potter. The two lawyers are cousins of the prosecuting attorney.

Take our poll: Who do you support for Court of Appeals — Barrett or White? We want to know. Choose your favorite candidate below.