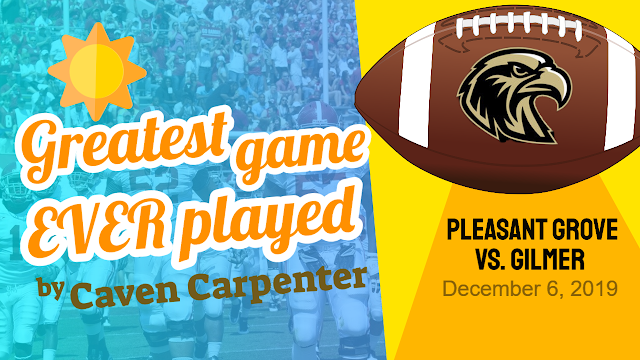 The playoffs continue for Pleasant Grove on Friday night, and columnist Caven Carpenter sizes up the competition: The Gilmer Buckeyes.

Plus, he explains why tonight's game makes him recall what many say is the greatest high school football game ever played with the infamous three minutes and three seconds.


Well Hawk fans, it's here.  Most of us knew before the season started that we would be playing the Gilmer Buckeyes twice this year: Once in the regular season and once deep in the playoffs.


And tonight it will happen as the Pleasant Grove Hawks take on the Gilmer Buckeyes at Lobo Stadium in Longview. Kickoff is set for 7 pm.


To be honest, this Hawk fan is as nervous as a cat in a room full of rocking chairs! The one saving grace is that I know for a fact that the Hawk players and coaches are NOT.


The late Stuart Scott would say of the Hawks: “They are as cool as the other side of the pillow.”  But guess what, so are the Buckeyes.


Successful coaches like Josh Gibson and Gilmer’s Matt Turner let their players know that the key to building a championship team is the belief that you will win every game.

Of course, this means that confidence and swagger will be on full display tonight in Longview.  More about the Hawks vs. Buckeyes game later.

It's lucky for any PG fans taking heart medication that the Hawks have only been in two close games this year. And both of those were decided with more than three minutes to play.

BUT, what if Friday's game comes down to the very last play?  Could your heart take it? I’m not sure mine could.

That got me thinking about the players, coaches, and fans of John Tyler and Plano East.

"Why?" you ask. Well, it seems like a few of us PG fans have the same discussion in the stadium after every Hawk touchdown.

I’m not going to mention any names... Michael Mugno. But here are the questions which are always discussed: “Why don’t we kick it deep?” And this one, too: “Why do we pooch kick?"

The John Tyler Lions were taking on the Plano East Panthers in the third round of the Texas High School Football Playoffs.

At the time, no one knew that this one game would spawn a segment on The Tonight Show with Jay Leno, an ESPY award, an ESPN special, and more than 2.5 million YouTube views.

That's because it was just an average, close game. That is, until the fourth quarter.

John Tyler was leading 27-10 midway through the fourth, but the Panthers were driving.

Plano East was on the Lions' 10-yard line about to cut the score to 3, when Plano East QB Jeff Whitley went back to pass but was stripped of the ball.

The John Tyler defender picked it up and went 90 yards for a TD. This put the Lions up by 17.

After that, everyone could see the coaches as they made their way from the press box to the sideline, and this basically signaled to the fans that it was “game over.”

So John Tyler’s coaches heard the fat lady singing, and they joined the other coaches on the sideline.

Then the Lions kick-off to the Panthers. And would you believe it: On the very next play, Plano East's QB fumbles again, and the Lions run it back for a TD!

That puts John Tyler up by 24 points. Now, it really appeared to be GAME OVER!

The clock at Texas Stadium, which was the old home of the Dallas Cowboys, read 3:03.  I’ll repeat it: three minutes and three seconds. And the Panthers were down by 24 points.

When the Lions kicked off, the second-team defense was on the field.

Several John Tyler starters had taken off their shoulder pads, and they appeared to be laughing and enjoying the victory on the sidelines. Basically, the players' minds weren't on Plano East anymore, and they were already dreaming about what it would be like to win the state championship in three weeks.

BUT, the Plano East Panthers weren't done yet.  With the John Tyler second-team defense in the game, the Panthers drive down the field to score in 3 plays.

I know what you're thinking: "This sounds like a movie script."

The Plano East kicker had been dismissed from the team a week earlier, so backup kicker and wide receiver Terence Green was now the kicker.

Terence had hardly ever kicked in a game and NEVER ATTEMPTED AN ON-SIDE KICK.

That's when the first of several miracles happened.

The Panthers recovered the on-side kick and quickly scored again.

Could you take it if this were the Hawks and Buckeyes tonight? Not Me!

On its own merits, this game is incredible. But what really made it famous was the Plano East radio crew of Denny Garver and Eddy Clinton.

This duo offered an unbelievable amount of folksy, humorous, down-home commentary, which caused the game to become even more legendary.

They threw around now-famous phrases like “good-gosh o'mighty.” And, another one: “I'm sick, I wanna throw up.”

These quips landed Garver and Clinton on television, talking to Jay Leno.

My personal favorite line from Garver came when he blasted Plano East fans for leaving the game early.

He said with a powerful voice, “IF YOU’RE IN THE CAR ON THE WAY BACK PLANO, YOU MISSED THE GREATEST COMEBACK OF ALL TIME, OF ALL TIME!”

Back to the game

The Panthers now have the ball, and trail John Tyler 41-37.

Now, there are just 48 seconds left in one of the teams' season. But which one?

Don’t you just love cliffhangers?  Maybe I’ll tell you about the ending. But first, let’s talk Hawks and the Buckeyes.

Do you know what a buckeye is?

It’s a nutlike seed found abundantly on shrubs here in East Texas.  It was used in Greco-Roman culture as a health remedy.

Over the years, people believed if you kept a buckeye in your pocket, it could cure many things and also bring you good luck.

Back in the 1920s, several male Gilmer fans stood on the sidelines to watch Gilmer play Henderson. Everything was pretty normal about them except for the fact that they were all carrying buckeyes.

When the men showed the Henderson fans the contents of their pockets, one Henderson fan yelled: “See you next year, you Gilmer Buckeyes.”

Of course, the Hawks weren't born in the Roaring Twenties — but in 1983.

But here we are today with the game we have dreamed about and waited for all season long.

What to watch for

1. Can the Hawks stop the Gilmer pass and force the Buckeyes to run?  PG’s strength is stopping the run.  The Pleasant Grove cornerbacks must have a great game.  #1 Sergio Rodriguez, #11 Riley Durmon, and #9 Quinn Bingham must stop the quick slant, and the slip or bubble screens.

2. Few people would disagree with the assertion that Hawks have one the best defensive lines in Texas.  And they will definitely need it tonight.  Gilmer has a great offensive line. We saw this when the Buckeyes did an admirable job of keeping the Hawks away from the QB in the first meeting.

3. Watch #40 Landon Jackson when the play goes away from him.  If you want to see why he is a 5-star recruit, watch how he chases the ball.  His size, speed, and desire to make every tackle is simply incredible.

4. You might remember that #25 KJ Hicks, and #6 Nick Martin did not play offense (or very little) on the first game with Gimer.  Both were still nursing injuries. But tonight, they will both be at 100 percent. And we have seen what they can do with the football in their hands.

6. The Hawks can’t have the turnovers and penalties they had last week. Plain and simple: They just can't.

7. BEN HARMON.  Since the inception of Pleasant Grove Football, there is no other player I would want to be on the field in the biggest game of the year than #10 Ben Harmon!  I want him in my foxhole, and I want him leading my team. And it’s not close!

Longview's Lobo Stadium is a historic stadium that has seen some of the most memorable regular-season/playoff games, players, and teams in East Texas.

BUT PLEASE BE VERY CAREFUL on your drive to the stadium.  There is a dangerous spot on Highway 259 coming into Longview.

Apparently, one family has a really spectacular Christmas light display, and people come from all over to see it.  The problem is that this has led to many accidents and traffic delays.

So remember to take the Judson Road Exit to the right. This should allow you to miss the possibility of a Christmas light-related traffic jam.

Lobo Stadium is just a few miles ahead on the left.  Parking is good, and the walk is not bad.

Since it's my column, I guess I am allowed to go off-topic just slightly for an important message. So here it is:

Good luck to the most beautiful, talented, and sweet Sugar Plum Fairy (and equally fantastic Showstoppers) who will be performing tonight in the Texarkana Community Ballet’s performance of The Nutcracker.

PG fans and the Hawks will miss you!  Thanks, Chloe Carpenter, for allowing Dad to travel to Longview to watch PG take on Gilmer.

I love you, and I can’t wait to see you on stage both Saturday and Sunday.

Maybe I shouldn't say what I'm about to say in a football column. But, folks, this is my daughter I'm talking about... So BREAK A LEG!

OH YEAH!  What happened in the final seconds of the John Tyler vs. Plano East game? Michael Mugno: Do you kick deep or pooch kick?

Trust me, I’m doing you a favor.  You need to know what happened. Take a couple minutes and watch the short, 4:37 YouTube video below.  YOU’RE WELCOME!