STATE CHAMPIONS: A Christmas Message - Where Pleasant Grove is going and where #HawkNation has been 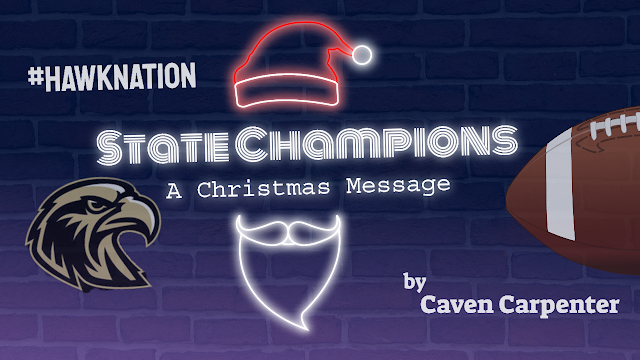 For many Pleasant Grove fans, Christmas came five days early as the Hawks once again made their mark on football in the state of Texas.


Columnist Caven Carpenter is feeling thankful this Christmas morning about the people who helped the Hawks realize this achievement, and he shares a major announcement about a PG icon:


In front of a crowd of close to 18,000 fans, the Pleasant Grove Hawks defeated the Wimberley Texans 35-21 at AT&T Stadium in Arlington last Friday to claim their second state championship in three years.

The title "4A Division 2 State Champions" has a spectacular ring to it, and realizing this achievement two out of the last three years makes it even better.  If you are like me and my crew, it now seems normal to make several trips to the Metroplex every year to watch our Hawks win.

In fact, even the state championship game now seems like a new, family Christmas tradition. And it appears there will be many more years of them to come.

As a kid, my favorite Christmas tradition was spending time with my cousins and family.

Christmas Eve was very busy during both the day and night. First, there would be presents at Great Grandmother’s house, and then we would move onto the next grandmother’s house for even more gifts.

Mom and Dad had very little trouble getting the "Carpenter Boys" in bed because the anticipation of Santa was so great.  I’m sure everyone has similar memories of Christmases from our past as we had great fun, food, and gifts while celebrating the birth of Jesus.

I’m also almost positive that your memories revolve around both friends and family. It sure does for me, and these last three years of memories with my Hawk Nation family will last a lifetime.

However, Christmas is also a time to reflect on the past year as 2020 approaches.

And there are some special people that deserve to be acknowledged for making all PG fans' Christmas moods and celebrations particularly bright as we celebrate today.

➽ Thank you, Coach Josh Gibson and your staff.  I don’t have the time or space to say enough “Thanks” and “I love you” to Josh.  I think we should all find him (and his coaches) and give them a big hug and a loud "thank you."  You see, we sometimes forget that when the players go home after practice, the coaches stay late. And while the players are cozy in their beds, the coaches are busy watching film and getting ready for Friday night.

➽ Thanks to the coaches' wives.  These wonderful ladies have given up their husbands since early August, so Hawk Nation could bring home another state title.

➽ Thank you, spirit groups.  In particular, thank you to Bass Deese, Shera Hopkins, and Tori DePriest.  We played 16 games this year, and Pleasant Grove had the best band, cheerleaders, and drill team! It's not even close!  My fondest moment of the year was standing on the sideline at AT&T Stadium with the clock ticking down while listening to the band playing the “Hawk Nation” song! At the same time, I was so proud to witness the Showstoppers and cheerleaders join in with such passion and love for their school. It brought a tear to my eye.

➽ Thank you PG School Board and Administration.  Trust me, there are school districts in Texas where Athletics and other extracurricular activities are put on the back burner.  We can see with our own eyes what football can do for a school district, the kids, and our community.  Without the support of these distinguished people, we would have no Josh Gibson and no state championships.

➽ Thank you, HAWKS.   This article would be as long as Tolstoy’s War and Peace if I thanked every Hawk player that had a hand in winning the state championship, so I am going to single out a few that made a significant impact on me this season in the paragraphs below.


Hawk standout performers
✪ Antonio Watkins: Antonio, you are the epitome of what it means to be a Pleasant Grove Hawk.  You love the game of football and your teammates, and it shows on Friday nights.  Maybe you didn't get the playing time you wanted last year (and perhaps not this year, either). But you listened to your coaches, and you were the ultimate teammate.  Not only that, on the biggest stage of your life, YOU MADE THE BIGGEST PLAY ALL YEAR!  I have been a part of PG football since 1984, and that was the most excited I have ever been for a player and a touchdown.  THANKS, TONI!

✪ Cameron Weekly: Cam, we would all have to be blind to not notice the two DUDES, (Landon Jackson and Marcus Burris) that play next to you. But, you, along with Jamie Lewis-Greer, are the reason that opposing teams had so much trouble running the ball all year.  I almost felt sorry for Wimberley’s center on Friday.  Both you and Jamie could have easily been the defensive players of the game. Jamie, you have a bright future in college football, and Cam, I can’t wait to watch you dominate again next year.

✪ Chris Druhan: Chris, You remind me of myself in 1985, except you are way better! I was an undersized offensive lineman like yourself, but you have taken your size and dominated. You also brought the team’s mottos of “Full Tilt” and “Heart and Soul" to the next level. You have inspired future Hawks to fully understand that size will not keep them from playing this great game. If you move through the next part of your life with the principles that the Hawk coaches have taught you, you are going to be the best doctor, father, and husband that anyone could ever ask for.  We are going to honestly miss #51!

✪ Jackson Cobb, Connor Stanfill, Josh Porchia, and Tamier Turner: I can’t imagine the pain you guys felt when you knew your season was over.  Jackson, thanks for playing football!  You are going to have a long and exceptional career in baseball, and you will never forget winning two rings.  Connor, Josh, and Tamier,  your positive attitudes and help on the sidelines were appreciated and noticed by everyone.  Football can be a cruel game. It’s said that adversity can reveal character, and it sure did.  You guys were the ultimate teammates.

✪ Ben Harmon:  Ben, In all my years of playing, coaching, and watching Pleasant Grove football, I would have never dreamed that the Hawks would be so fortunate to have a player like you! If we could build a quarterback in a lab, you would be it.  It comes down to this, I was asked several times last week, “Are we going to win?” My answer was, “YES, WE HAVE BEN HARMON AND THEY DON’T.” I added: “BEN WON’T ALLOW US TO LOSE!” To play through pain like you did on Friday proves that I was right. My brother, if you want to play football at Arkansas, Texas, or anywhere else, YOU CAN! Trust me! I can’t wait to follow your career. And I won’t be shocked if, one day, you are the head coach at The Grove.  THANKS, BEN!

Spirit Melon: May we never forget

If you have followed my writings, then you might be familiar with the small green watermelon that has become a cherished icon of the Hawks for the past three seasons.  You can read the full history by clicking here.

The legend began in 2017 when my daughter, who is a PG Showstopper (Chloe), became convinced that a very special melon — yes, a watermelon — could be important in bringing the Hawks luck.

Shockingly, she was right... it did bring PG good luck! As of December 20, the Spirit Melon, as it soon became known, had compiled an enviable record of 44-4. Not too bad for a fruit!

All the while, the Spirit Melon had endured car rides with extreme heat and freezing cold bus excursions. She also made 5 trips to The Star, 3 visits to AT&T Stadium, and living quarters in several refrigerators. And, most importantly, she never lost her love for the Hawks.

Much like Ben Harmon, who had to play through pain, the Spirit Melon was no different.  She knew her days were few, but she showed "heart and soul" by hanging on until the very end.

Now it is with great sorrow that I must announce that the great Pleasant Grove Showstopper Spirit Melon has left this earthly world to parts unknown.  She leaves behind the "Keeper of the Melon" Chloe Carpenter, many Showstopper friends, and countless Hawk fans.

This is probably a good time for a quote from the classic Christmas film A Christmas Story: “Later that night, alone in the back yard, he buried it next to the garage. Now I couldn’t be sure, but I thought I heard the sounds of TAPS being played softly."

4 things to watch for next year

1. The Hawk defensive Line will be back! Look for them to make waves in both state and national publications.

2. I also can’t wait to see Jalen Woodside take over as the new Hawk quarterback.

3. It’s time for Logan Johnson to shine as the featured running back.

4. Also look for the Hawk youngsters (Trenton Kelly, RJ Collins, and Jonah Bates) in the backfield.


About the author: Caven Carpenter is an avid fan of all things Pleasant Grove and is a former PGISD coach. He was a member of Pleasant Grove's very first graduating class and a player on its first varsity football team. Besides being a self-proclaimed expert on sports, history, music, and movies, Caven is a family man who also loves helping people find the right insurance as a local agent for Texas Farm Bureau.