Artmobile rolls into Hope, Arkansas with "Spirit of Independence" exhibit 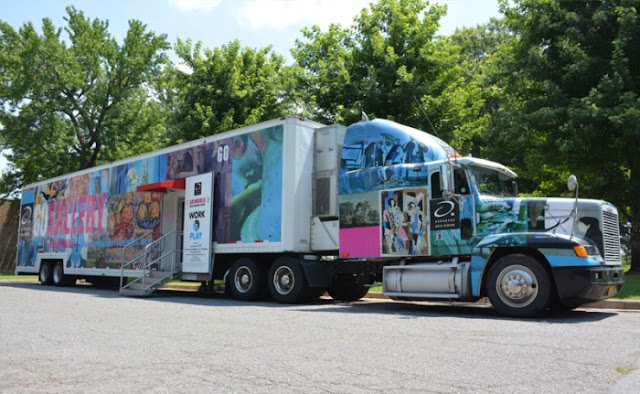 The famous Artmobile from the Arkansas Arts Center is rolling into Hope, Arkansas, and it will be on the high school campus from December 9 through December 13.

The Artmobile will feature the “Spirit of Independence” Arkansas Arts Center exhibition. The exhibited works were commissioned through The Lorillard Corporation, a division of Loews, highlighting the American Bicentennial in 1976.


Other American-themed works from the AAC collection are also exhibited.


The Artmobile will be open to scheduled class tours for the Hope Public Schools through the week under a partnership between the Hope Public Schools and the Arts in Education program of the Southwest Arkansas Arts Council. Student tours will include Clinton Primary School, Monday; Hope Academy of Public Service, Tuesday; Hope High School, Wednesday; Yerger Middle School and CPS second grade, Thursday; and Beryl Henry Elementary School, Friday.

The 18-wheeler based exhibition center was built specifically for the AAC in 2002 to better accommodate access to rural Arkansas schools and communities after the retirement of the original mobile art museum. The unique exhibition vehicle features space for curated exhibitions of works from the permanent collection of the Arkansas Arts Center in Little Rock.

An educator-interpreter guides each tour.

The Arkansas Arts Center Artmobile is sponsored by Arkansas Electric Cooperative Corporation, Bank of America, Entergy Arkansas, Inc., Ginanne Graves Long, HoganTaylor LLP, Kum & Go, and Union Pacific Foundation. The program is supported in part by the Arkansas Arts Council, an agency of the Department of Arkansas Heritage and the National Endowment for the Arts with special recognition of the Winthrop Rockefeller Foundation.