Would You Ever Believe? Pleasant Grove Hawks vs. Pittsburg Pirates: GAME PREVIEW 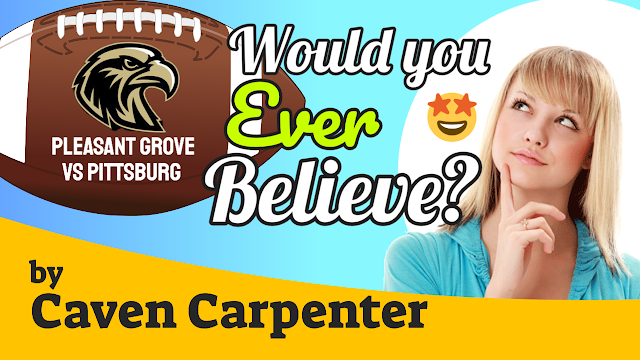 Tonight, the PG Hawks take on the Pittsburg Pirates in an away game.

Caven Carpenter tells us what to watch for at tonight's matchup and discusses last Friday's game.

With inspiration drawn from his friend Monica Kelley, he looks at the Hawks' history since the '80s and contrasts it to the reality of today.

All week, I've been asked: “When are you going to write about the Carthage game?”

My response: Last Friday has to sink in for a few days.

So after some reflection, here are my two main takeaways from PG vs Carthage:
1. It was a great game between two Texas powerhouses.
2. The best team on the day won.

The most significant part of the whole week was watching my sweet, smart, beautiful, caring, football-loving daughter, Chloe Carpenter, enjoy her senior year as a PG Homecoming Princess!

I don't think a smile left her face from Monday to Friday.

To be honest, her biggest joy came while standing on the field when she heard the name of the new Homecoming Queen: Georgia Cobb.

And I have to say that PG's newest queen may be one of the sweetest souls I have ever met. Congratulations, Georgia!

Last week, I heard some watercooler talk around Texarkana. The gist of it was that some people were getting tired of the growing attention received by the Pleasant Grove Hawks.

I get it. With social media, talk radio and writing from people like me, more notice is being paid to the Hawks than ever before.

But I think it could be explained by a single word — an uplifting word that I heard in several different sentences by more than a dozen people last Friday night.

That word is BELIEVE.

WYEB (Would You Ever Believe)?

WYEB? In 1983, a media outlet in this area published an article which basically said: Pleasant Grove will never win in any sport except golf, tennis, and possibly baseball.

WYEB? Over the past 35 years, the Hawks participated in games where they were beaten by 40, 50, 60 points on what seemed like dozens of occasions.

Have you ever watched a game where the clock runs without stopping so the dominant team won't score 100 points?  Well, I have, and the Hawks weren't the ones on their way to three digits.

WYEB?  Every school in East Texas was literally begging to schedule football games against the Hawks in past years. Today, there's a good chance the Hawks will only have 8 or 9 games in 2020. That's because nobody in East Texas wants PG (and an anticipated loss) on their schedule.

WYEB? For YEARS, news coverage of Hawk Football games would often be on the second or third page of the Texarkana Gazette. Yes, the newspaper had great sportswriters like Johnny Green and Louie Avery. But, to be honest, nobody wanted to read about the lowly Hawks. At the time, not even me.

WYEB? During the past three decades, COUNTLESS NUMBERS of great football players actually transferred away from Pleasant Grove to play at other schools. Some even transferred in the middle of the football season.

Today, WYEB (Would You Ever Believe)?

Today, WYEB?  Season tickets now sell out in one day. Plus, 1,500 general admission tickets sold out in just four hours.

Today, WYEB?  Coach Josh Gibson had to turn down over 50 requests for sideline passes for last Friday's game against Carthage.

Today, WYEB?  The grass hill in the south end zone is full because Hawk Stadium is now too small.

Today, WYEB?  An SEC head coach would land in a helicopter at a PG game.

Today, WYEB?  AT&T Stadium in Arlington would have three full decks cheering on the Hawks at a state championship game.

Today, WYEB?  Pleasant Grove's head coach met a man last week from Alaska who had never been to a Texas high school football game. He wanted the Hawks vs. Carthage game to be his first.

Here are some of the comments I heard last Friday night:
“I can’t believe this.”
“Is this really happening?”
“Did you ever believe this was possible?”

The “believe” word has been tossed around a lot over the past few years here at The Grove. But last Friday had to be an all-time record.

I’m not a betting man, but I genuinely BELIEVE it’s not going away anytime soon!

YES, the Hawks are getting a lot of attention, but they deserve it.

Plus, they have waited 35 long years to have this moment.

The Hawks travel to Pittsburg in Camp County, Texas, tonight to take on the Pirates.

This will be the third time in ten months the two teams have met.

Last year the Hawks beat the Pirates once in district and once in the 4th round of the playoffs.

Look for a different Pirate lineup tonight.  This team lost some big-time playmakers from a year ago   — most notably their quarterback and wide receiver.

But don’t take them lightly.

They are young and athletic, and the Hawks will always get the very best from every opponent.

It must be noted that Pittsburg has beaten 5A Pine Tree and 4A D1 Kilgore.

One reason for this: The team is led by one of the best young coaches in East Texas: Brad Baca.

Who to keep your eye on

1. The Pirates will do whatever they can to stop Bruce Garrett. So I think #26 Logan Johnson might have a huge game.  In fact, I look for him to break the 100-yard rushing mark.

2. Watch #77 Connor Stanfill. He hates losing, so I look for him to play angry!  Trust me, Pittsburg, you don’t want him mad!

4. On defense, keep your eye on #34 Gage Stivers at linebacker.

I look for Nick Martin to sit this game out with a bum ankle, so Stivers needs to step in and play big to stop the run of the Pirates.

5. Safety #5 Andrew LeGrand came back last week against Carthage after missing three weeks and did well.

Pittsburg will test the Hawks' secondary, so look for LeGrand and #25 KJ Hicks to step up.

6. I know this is way out on a limb, but the Over/Under on Landon Jackson sacks is 2.5.

Eating and Parking in Pittsburg

BEST EATING IN AND AROUND PITTSBURG

1.    Mt. Pleasant Burgers and Fries: Best burger between Texarkana and Dallas! Side note: share the fries with your buddy! (Located in Mount Pleasant — not in Pittsburg)
2.    Herschel’s Restaurant Pittsburg: Home cooking, very similar to Dixie Diner.
3.    Outlaw BBQ Mt. Pleasant: Get the brisket!
4.    Pittsburg Hot Link: Fresh homemade hot links. A word of caution: You may not be able to sit through the whole game!

1. Parking at the stadium is not too bad.
2. Go past the baseball field. Then, look for the gym on the right.
3. Visitor parking is close to the Pirate Gym with a somewhat short walk
4. Pittsburg has excellent facilities, and the restrooms are the only bad part (sorry, Pirate fans).

Following last Friday's game, the rumor mill at The Grove is saying that the beloved Spirit Melon that I have written about in a previous column (click here to read) has met an untimely (and possibly gruesome) death.

Details are fuzzy... thoughts and prayers!