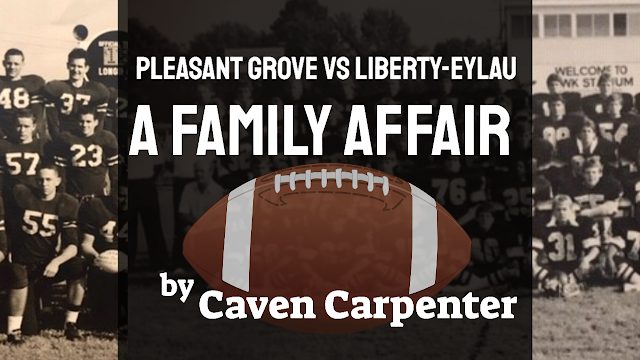 Texarkana football is indeed a family affair for one father and son.

As Pleasant Grove faces Liberty-Eylau tonight, columnist Caven Carpenter explores the origins of LE and PG football and discusses how lessons from the '50s and '80s intersect with Friday's matchup:

Here in the Carpenter family, the day of the big cross-town rivalry between Pleasant Grove and Liberty-Eylau evokes great football memories from days gone by.

These are more than just everyday recollections of past accomplishments in sports when it comes to me and my father.

It actually goes deeper than that.

You see, both he and I played a small role in the birth of football for the Liberty-Eylau Leopards and the Pleasant Grove Hawks.

The Leopards played their very first football game way back in 1956.

My dad, Mike Carpenter, was a freshman lineman.

In those days, LE didn't have separate freshman or JV teams. Every player was on one team: the varsity.

That year, the Leopards were coached by Jim Crowson and won the very first game they ever played in Liberty-Eylau by beating Bogota 22-2.

Coach Ronnie Bailey took over the following year and began to build a winning program.

In 1959, the Leopards went 12-1 and won their first district championship and regional championship.

Ronnie was assisted by Sporty Carpenter, who later became a long-time coach at Henderson State University. Eventually, the football field at Henderson was named after him.

In 2019, it’s very unusual for a team to have five players go on to play Division 1 football.

My father, Mike Carpenter, along with Bob Harrison and James Bowerman, went on to play for Oklahoma State.

This group of men laid the foundation for Liberty-Eylau football.

My dad, Mike, would finish college and return to LE as a coach for one year and then moved on to Texas High for two years.

Dad still likes to tell the story of only making $350 a month as a coach for LE.

Most little boys want to grow up to be just like their daddy.

Well, I really did.

At the time, PG was the largest school district in Texas without a high school.

The past repeats itself

Dad and I went through very similar situations in football as founding team members of our respective high schools.

I played on the very first Pleasant Grove varsity football team in 1984. Our team had no seniors — only juniors and sophomores.

As I have previously mentioned in this column, victories were rare.

PG was coached by Johnny Toombs, and we won our very first varsity game in 1984 by beating Maud 15-12.

The first couple of years were tough for the Hawks going 5-15, and PG's inaugural district championship came in 1988.

Just like my dad, I wanted to be a coach. And I feel so fortunate to have achieved that goal and coached at Pleasant Grove for four seasons.

When I think back to my own experience of the first PG football team, I wonder if the Leopard coaches in the 1950s told my dad's team the same thing PG Coach Johnny Toombs said to us before our very first game.

The memory is so vivid that I can recall it like it was just yesterday.

Coach Toombs told us: “One day, you guys will come back to Pleasant Grove, and you won’t recognize it."

He went on: "They will have a great program with many championships."

"You can tell your kids and grandkids you helped build it,” he added.

What’s crazy about this? My goofy, 16-year-old self believed every word!

Yes, the Leopards are down a little, but they are building for the future under Coach Klint King.

Also, remember this: Some would argue that LE has had the hardest schedule at any level in Texas!

I talked with Pleasant Grove Coach Josh Gibson, and he made one comment that stood out:

“Their [Liberty-Eylau Leopards] offense scares me!” Coach Gibson told me.

That's probably because the Leopards might have just as much speed — if not more — than Carthage or Gilmer.

To say that they are hungry and would love to knock off the #1 team would be the understatement of the year.

1. Watch LE run the lead option.  This is when the quarterback can either handoff to the back or pull the ball and keep it.
2. Watch LE run the RPO (or run-pass option).  This is the same as above, but the QB now has the option to throw the ball.
3. Watch the quick pass by the Leopards to negate the Hawk pass rush.
4. Watch for fake punts, onside kick-offs, and trick plays.  LE has to gamble.

This may sound crazy, but look for LE to run the lead option right at Landon Jackson.

The Hawks will have to play sound, smart, assignment football.

Linebackers #6 Nick Martin, #23 Dylan Hopkins, and #34 Gage Stivers will need to play big to stop the option and the quarterback run.

It looks like rain, so Ben Harmon will have to be careful on every snap.  Turnovers will play a massive role in this game.

The offensive line needs to come up big.  With the weather being suspect, I look for the run game to be significant Smashmouth, BIG BOY FOOTBALL.

That being said... If you know Josh Gibson like I do, the weather won’t stop the Hawks from airing it out.

Liberty Eylau does a great job with visitor parking.

Just follow the parking attendants around to the back of the visitor bleachers.

The walk to the stadium is a very short distance.

BEST EATS IN LIBERTY-EYLAU:
1. The Lunch Box
You may have to go during lunch hours because they aren't open for dinner.  But if you have never eaten at The Lunch Box, SHAME ON YOU!  Home-cooked meals made by great people! The Honey Bun Cake will make you want to slap your momma!!!
2. Wayne's Family Restaurant
Excellent catfish and burgers at an LE landmark. I would like to list numbers and names for the 1959 Liberty-Eylau football team shown in the photo above.  Over time, memories fade. But here they are:
#55 Mike Carpenter
#44 Billy Black
#30 Bob Harrison
#40 James Bowerman
#33 Gene Bruce
#37 Travis Mauldin
#51 Billy Upson
#20 Johnny Colorigh 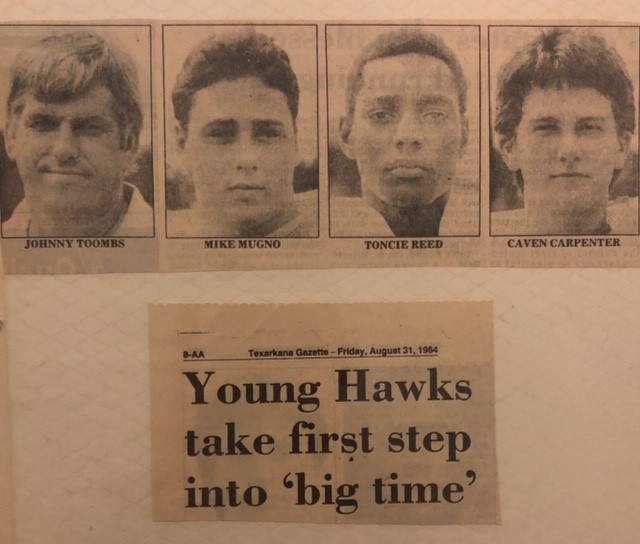