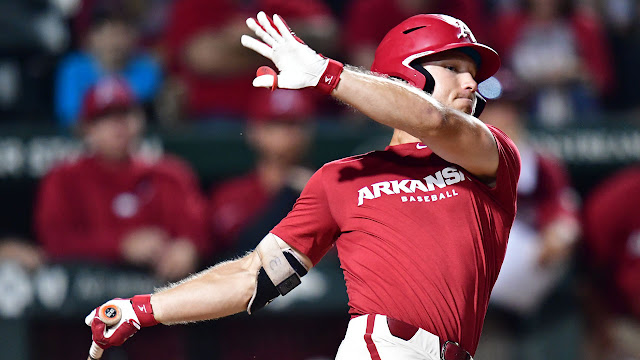 No one wanted to miss the Arkansas Razorbacks as they faced the Oklahoma Sooners on Friday night in Fayetteville.

An estimated crowd of 6,378 were in attendance Friday night at Baum-Walker Stadium as the Arkansas baseball team took on Oklahoma in its first fall exhibition of 2019.

It was nearly 1,000 more than last year’s exhibition against Wichita State as fans got a small taste of what was to come in the 2020 season.

Junior Heston Kjerstad and grad-transfer Cole Austin each turned in two hits in the game, but Arkansas’ hitters struggled against the Sooner pitching staff throughout the night.

The Razorbacks only had one hit through the first four innings and didn’t score their first run until the fifth inning when Austin turned around a lead-off walk and a stolen base into a run driven in by freshman Dominic Tamez.

Austin finished the game with the best line of the night, going 2-for-3 with a run scored and an RBI.

He drove in Arkansas’ second run in the bottom of the ninth as the Hogs tried a valiant final effort to make a three-run comeback.

Kjerstad led off the ninth with a triple off the right-centerfield wall and was brought in by Austin’s single to left field.

On the mound, redshirt junior Kevin Kopps got the start, but only pitched the first inning, giving up no runs on two hits, facing five batters.

Wicklander and Noland, who were each coming off all-conference seasons for the Razorbacks, took on the meat of the work, combining for four innings, but allowed two of Oklahoma’s four runs, including a solo home run in the top of the fifth by Tanner Tredaway.

The Razorbacks will continue with fall practice next week before playing its final fall exhibition on Saturday, Oct. 12 against Oklahoma State in Stillwater, Oklahoma.

The game will be played at Allie P. Reynolds Stadium and will have first pitch at Noon.