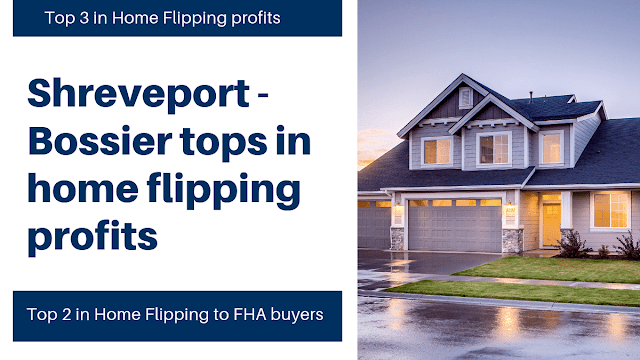 Shreveport and Bossier City are great places to buy a home, flip it and then make a big profit according to ATTOM Data Solutions, curator of the nation's premier property database.

The data solution company released its Q1 2019 U.S. Home Flipping Report, which shows that 49,059 U.S. single family homes and condos were flipped in the first quarter of 2019, down 2 percent from the previous quarter and down 8 percent from a year ago to a three-year low.

Of 138 metro areas studied during the first quarter of 2019, Shreveport/Bossier was a Top 3 city for overall return on investment (ROI) for home flipping in the US and a Top 2 metro area for flipped homes sold to Federal Housing Administration buyers (see full details below).

The 49,059 homes flipped in the first quarter represented 7.2 percent of all home sales during the quarter, up from 5.9 percent in the previous quarter and up from 6.7 percent a year ago — the highest home flipping rate since Q1 2010.

"With interest rates dropping and home price increases starting to ease, investors may be getting out while the getting is good, before the market softens further," said Todd Teta, chief product officer at ATTOM Data Solutions. "While the home flipping rate is increasing, gross profits and ROI are starting to weaken and the number of investors that are flipping is down 11 percent from last year. Therefore, if investors are seeing profit margins drop, they may be acting now and selling before price increases drop even more."

Along with Raleigh, Charlotte, and Milwaukee, other metro areas with a population of at least 1 million and a home flipping rate increasing in the double digits were San Antonio, Texas (up 47 percent); Houston, Texas (up 41 percent); Atlanta, Georgia (up 38 percent); Pittsburgh, Pennsylvania (up 36 percent); and Minneapolis, Minnesota (up 33 percent).

The number of homes flipped reached new peaks in Q1 2019 for Raleigh, North Carolina and San Antonio, Texas in the first quarter of 2019.

Flipped homes originally purchased by the investor with financing represented 37.5 percent of homes flipped in Q1 2019, down from 39.5 percent in the previous quarter and down from 41.2 percent a year ago.

11 Markets where investors are doubling their ROI

ATTOM Data Solutions analyzed sales deed data for this report. A single-family home or condo flip was any arms-length transaction that occurred in the quarter where a previous arms-length transaction on the same property had occurred within the last 12 months. The average gross flipping profit is the difference between the purchase price and the flipped price (not including rehab costs and other expenses incurred, which flipping veterans estimate typically run between 20 percent and 33 percent of the property's after repair value). Gross flipping return on investment was calculated by dividing the gross flipping profit by the first sale (purchase) price.