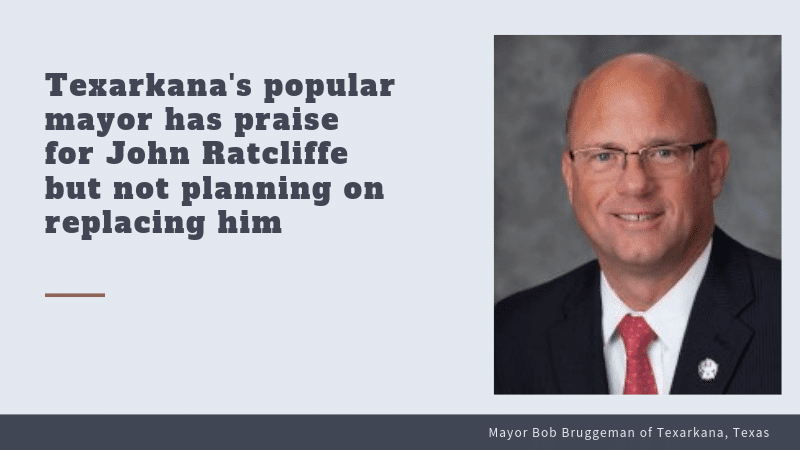 So far, he does not have plans to run for U.S. Congress in the seat that will soon be vacated by Rep. John Ratcliffe.

In a conversation on Monday, Mayor Bruggeman took special care in praising Rep. John Ratcliffe for his service to the Fourth Congressional District of Texas.

Asked if he will be a candidate for the TX-4 seat, Bruggeman said: "I will not."

However, if the Texarkana mayor did decide to run, he would have instant gravitas in the race.

"I think Congressman Ratcliffe did an outstanding job," Bruggeman said. "He was very accessible and attentive to issues in the region."

The mayor added: "John Ratcliffe has been a great congressman with excellent service to this region. I wish him well in his new position."

Mayor Bruggeman listed factors he would look for in a new member of Congress. They included a keen interest in helping East Texas, and the mayor was especially careful to mention that he would like a representative who would continue to care for Red River Army Depot and the TexAmericas Center like John Ratcliffe did.

"We want someone accessible and listening to the region," Bruggeman said.

The last time TX-4 was an open seat was in January 1981. Ralph Hall occupied the office when John Ratcliffe challenged him in the Republican primary and won. So Congressman Ray Roberts who served from 1961 until he announced his retirement while Jimmy Carter was president, was replaced in the 1980 election that brought Ronald Reagan to the White House.

While it sounds like Bruggeman is not going to be a candidate in TX-4, it is not out the question that he could be persuaded by citizens. However, he all but shut the door on a candidacy Monday.

Nevertheless, the popular mayor seems intent on making sure that issues important to Texarkana are front and center of the race to succeed John Ratcliffe in the 4th District.

John Ratcliffe was announced as President Trump's candidate to replace former Sen. Dan Coats as Director of National Intelligence. Today, the Senate committee running the confirmation said Ratcliffe would be on the "fast track" to approval.