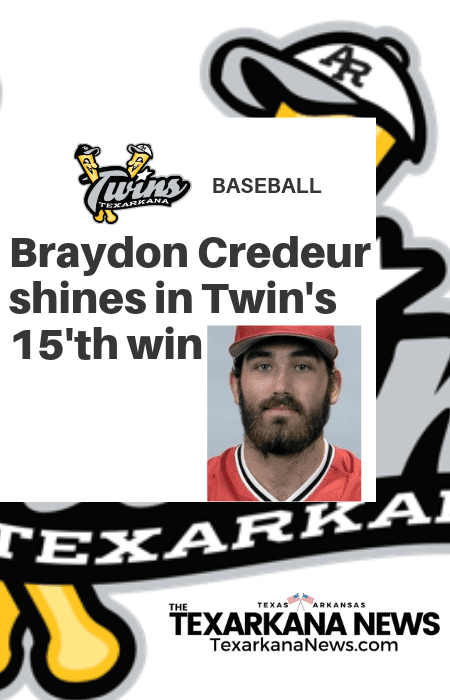 Braydon Credeur is kind of having a moment. For that matter, so are the Texarkana Twins who powered to 7 runs tonight (Saturday, July, 13) against Arcadiana.

The Twins took down the Acadiana Cane Cutters in the first night of Warrior Weekend. The game was very quiet for the Twins until the bottom of the sixth. The Cane Cutters have a chance to make a comeback tomorrow night.

Acadiana Cane Cutters were the first one on the board by scoring four in the top of the fourth inning. Matthew Foster who had pitched a solid 3 innings and was down to one out in the fourth.

A ground ball to Blake Shannon and with his throw being a little high pulled Lee Thomas off the bag and the runner was safe. After that, the Cane Cutters were able to score 3 more runs putting them up 4-0.

Going into the bottom of the sixth inning the Twins were down 6-0. Lee Thomas was able to get the inning started with a shot that hit the wall.

Up next to bat was Christian Boulware. Boulware then proceeded to hit a home run that cleared the left field wall by 8 feet.

This started the rally that the Twins needed.

After a Noah Sifrit double, Shannon getting hit by a pitch, and a Matt  Kissamis single, Tom Litchy came up to the plate.

Litchy then extended his hitting streak to 16 games by hitting an RBI single into right field.

With the Twins down by three runs Shea Gutierrez stepped up the plate with the bases loaded. Gutierrez smoked a ball down the left field line for a bases clearing double to tie the game.

Ryne Randle then brought home Gurierrez with an RBI double putting the Twins up 7-6.

Braydon Credeur was lights out on the mound for the Twins. He pitched 3 2⁄3 innings and struck out 7 to get his 3rd win and bringing his ERA down to 1.16.

The Twins go for the series sweep against the Cane Cutters tomorrow and finish up the rest of the homestand versus the Victoria Generals.

Tomorrow is also the second day of Warrior Weekend. You will want to buy a ticket for this one.

Editor's note: For information about the team and more visit texarkanatwins.com or call 903-294-PLAY.