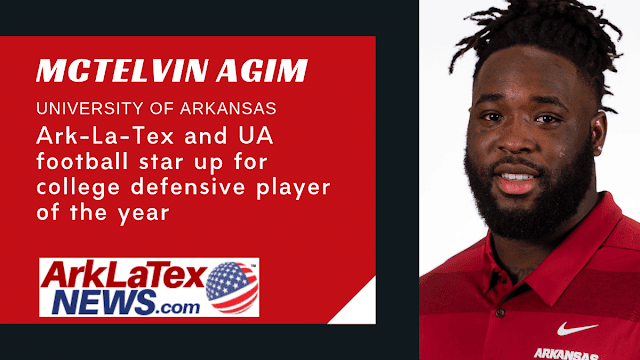 A Hope High School football standout from Texarkana, Arkansas who has become one of the top defensive linemen in the SEC and in college football is getting serious consideration for one of college football's most prestigious awards.

In its 25th year, the Bednarik Award recognizes the top college defensive player of the year and is named after former Penn and Philadelphia Eagles standout Chuck Bednarik. It marks back-to-back years the Razorbacks have been represented on the watch list, as De’Jon Harris made last year’s squad.

Agim, a native of Texarkana, Arkansas, put together a strong junior campaign for the Razorbacks, racking up 45 total tackles, 16 unassisted, over 12 starts in 2018. He led the team in tackles for loss last year with 10, making him the first Arkansas defender to reach double-digit TFLs since Deatrich Wise Jr. in 2015.

Nearly half of his tackles for loss were sacks (4.5), as he’ll enter the season as Arkansas’ active career leader in both categories. Agim also forced a team-best three fumbles in 2018, including two at Colorado State on Sept. 8 to make him the only Razorback on the roster to force multiple fumbles in two separate games heading into the 2019 campaign.

Agim will be one of three player representatives at the 2019 SEC Football Media Days on Wednesday, July 17, in Birmingham, Alabama, joining Harris and Devwah Whaley, as well as head coach Chad Morris.