Former Texarkana resident Sarah Huckabee Sanders may be headed to TV after leaving the White House — even if she has already decided on a 2022 run for Arkansas governor.
Sanders announced last week that she is leaving her job as press secretary at the end of the month, and both she and President Donald Trump dropped hints that she might be seeking public office in the future.

The Hollywood Reporter says a former White House official privately said Fox News would be the most likely new TV home for Sanders, but other options could be on the table as well.

Her father, Mike Huckabee, has his own show every Saturday night at 7 pm on the Trinity Broadcasting Network, and it is possible that TBN could be interested in a double dose of Huckabee.

Most people outside the ArkLaTex don't know that Governor Huckabee started a TV station in Texarkana along with Gary Underwood while he was in Texarkana, and Sanders grew up watching her father host a weekly talk show along with TV sports broadcasts.

Alternatively, but far less likely, a cable news network like CNN or MSNBC might decide  to use Sanders as a contributor.

As one of the most famous women in America following her stint at the White House, Sanders might also decide to produce a reality TV show like Sarah Palin.

Sanders has a loving husband and three children. The public might very well be interested in the family as they move back to Arkansas.

Sanders could also be part of a documentary series on the Natural State of Arkansas. As the daughter of the former governor, she knows the state well.

Whatever the former press secretary does, people are bound to be interested. Her departure drew front page headlines across the nation.

Locally, many people fondly remember the Huckabee family from their years in Texarkana and the ArkLaTex. Indeed, many have remained close friends of the family. So they may the first to know about Sanders' plans. 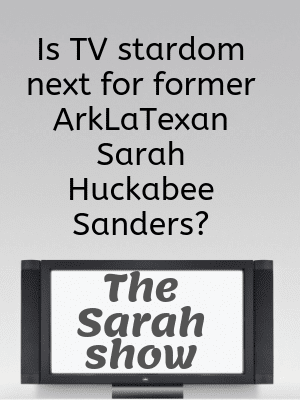