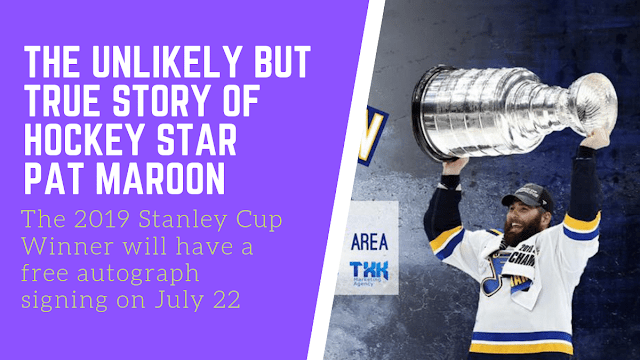 Pat Maroon must have thought he was living in a dream on that June, 2019 night as he lifted hockey's biggest prize above his head.

All his adult life, he had thought about this moment. But surely he never expected things to turn out like this when he began his hockey career at the age of 17 with the Texarkana Bandits.

But on that big night with the Stanley Cup securely in his hands, his home state of Missouri was on his mind.

Pat Maroon grew up 15 miles outside of St. Louis, and he had only signed with the St. Louis Blues in July. Because he was back in his hometown, recently he had even been dreaming about bringing the Stanley Cup back to St Louis.

There was just one problem: In January, 2019 the St. Louis Blues were last place in the NHL.

No team had ever gone from last place to first. Moreover, the team had never won the cup in its 52-year history, and the Blues last made it to the finals in 1970. That's 49 years ago.

But everything changed for the St. Louis Blues on that magical Wednesday night. After masterful playoff performances on the ice, they won it all.

And one of the stars of the season was Patrick Maroon.

When the big moment finally arrived, the victory was even sweeter than Maroon ever could have imagined as he held the Stanley Cup above his head.

And in what has all the makings of a classic soft drink commercial, Maroon gently lowered the Stanley Cup so his 10-year-old (Anthony) could give it a kiss.

But the moment probably would have never happened if Pat Maroon had never been recruited as a 17-year-old to the Texarkana Bandits.

But scout Burkart was not impressed with Maroon and did not want to "waste" an offer on him.

The player himself does not fault Burkart for his initial assessment as he is critical of his speed and weight during the period before he joined the Texarkana Bandits.

Indeed, Maroon was a husky child growing up, and he was even endearingly called "Fat Pat." But people close to him also recognized his hockey talent. But would anyone else notice?

Texarkana Bandits Coach Jon Cooper — now head coach for the Tampa Bay Lightning — did give Maroon a second look after scout Burkart was ready to pass on the Missouri player. Cooper saw something special in the way Maroon approached hockey.

Coach Cooper believed Maroon had great hands and vision even though he was not the best skater. So Cooper took a chance on Pat Maroon, and he has consistently proven the coach right.

Cooper believed Maroon was an "untapped talent," and the hockey player, now 31, is still grateful the coach gave a major opportunity to a "slow and fat" kid.

"The rest is history," Maroon said.

In 57 recorded games with the Texarkana Bandits from 2005-2006, Maroon scored 60 points and was given a spot on the North American Hockey League (NAHL) All-Rookie Team.

The following season, the Texarkana Bandits became the St. Louis Bandits, and Maroon was overjoyed to be back in his hometown for the 2006-2007 season. He later entered the NHL in 2007 after being drafted 161st overall by the Philadelphia Flyers.

And after stints with the Flyers, Anaheim Ducks, Edmonton Oilers and New Jersey Devils, everything came full circle for Pat Maroon during the final game on a day that he will never forget as a star player for his hometown St. Louis Blues.

But before the final game against the Boston Bruins, Maroon knew deep down in his heart that he had helped his team get to where they were: During Game 7 of the second round, Maroon scored the series-clinching  goal in double overtime against the Dallas Stars.

Now, with the Stanley Cup in his hands, Pat Maroon must have suddenly realized how improbable it was that he was part of hockey history.

That's because he had taken a chance to even be playing with the St. Louis Blues — as he had only signed a one-year contract with the team in July so he could be closer to his family.

Choosing his family and quality of life in St. Louis cost Maroon a significant amount of money. But there has only been joy at the Maroon home. You see, family comes first in his life.

"This is truly something I'll never forget," he said. "Me and my son will take this to our grave. We'll have memories for life."

Indeed, the decision to sign with St. Louis must be even sweeter as Pat Maroon thinks about everything that got him to hockey's biggest night.

And in Texarkana, many fans and friends of Pat Maroon are also thinking back to the fun and exciting times they had with the Bandits while also celebrating the small part they played in helping a Missouri kid with a lot of raw talent become a world-class hockey superstar.

Patrick Maroon will be coming to Texarkana for a FREE local autograph signing on July 22, 2019 from 7:30 pm to 9 pm at the Four States Fairground VIP Area.

Thanks to all the great sponsors: Fay J Winery, Ledwell and TXK Marketing. 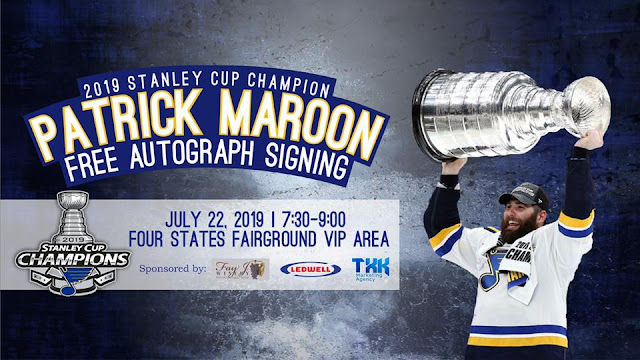 (below) Television screenshot as Pat Maroon faces the team with joy in his heart. 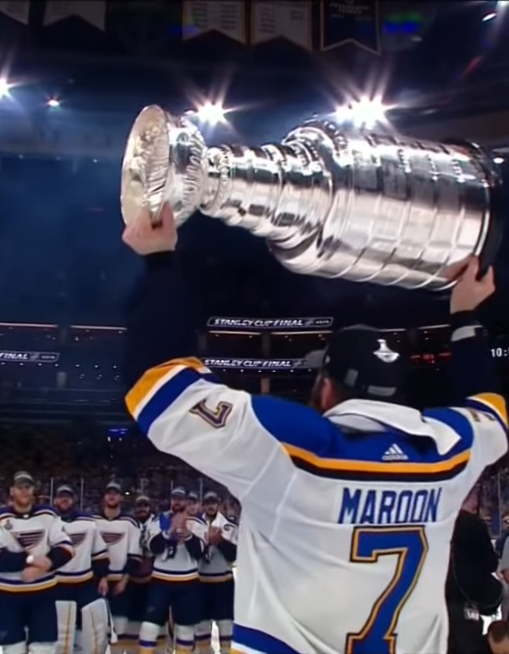