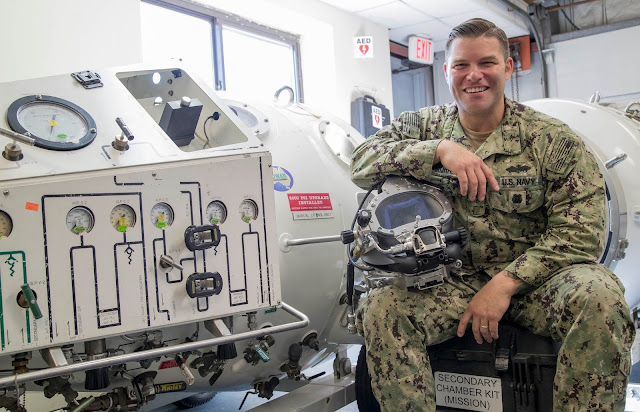 A Texarkana, Texas US Navy sailor who graduated from New Boston High School and attended Henderson State University has achieved the high honor of Navy Diver of the Year.

Hawthorne graduated from New Boston High School in Texas in 2001 and attended Henderson State University in Arkansas before enlisting in the Navy in 2003. Throughout his Navy career, Hawthorne has deployed to a number of locations to include Spain, Tanzania, Sicily, Cuba, Ethiopia, Morocco, Ukraine, Greenland, two tours to Iraq, and Okinawa.

The award was presented by Carl M. Brashear Foundation president and founder, Philip Brashear. Brashear is the son of retired Master Chief Boatswain’s Mate Carl Brashear, the first African-American master diver whose life story and immense impact on the Navy Dive community was told in the movie Men of Honor and is kept alive today by the foundation.

The Navy Diver of the Year award was established in 2014 to recognize the Navy diving community’s commitment to excellence. The award specifically honors the Navy diver who overcame a significant personal or professional challenge to demonstrate the unwavering courage and determination embodied by the legendary Brashear.

Hawthorne was selected as this year’s award recipient for the tremendous strength he displayed as both an exemplary member of UCT-1 and as a father of a young son born with a rare genetic disease.

“Learning of Declan’s condition was a very difficult thing to comprehend," said Hawthorne. "From 2015 to 2017 he went through two major surgeries and was hospitalized every two to three months. Those visits would last anywhere from three to seven days. At the same time, I was working on qualifications, completing my associates degree and volunteering in the community. It was very difficult to deal with and a lot of the time I felt the weight of the world on my shoulders and pretty much almost gave up.”

Hawthorne knew he had a make a change. In the face of adversity, he chose to channel perseverance and determination.

“Early in 2017, I finally started fighting back and turned things around,” said Hawthorne. “I adopted a new mentality. I told myself that a man who fights for what he wants and never gives up will eventually achieve his wildest dreams.”

In 2018 Declan had his last major surgery. At work, Hawthorne’s stand out leadership and expertise enabled UCT-1 to operate at the highest levels of performance.

“BU1 Hawthorne is an outstanding representation of UCT-1 and the Navy Diver community,” said Lt. Cmdr. James Johncock, UTC-1’s commanding officer. “This award is a testimony to his character, leadership and drive to succeed. Through his balancing of both personal and professional responsibilities, while filling such a critical role in this command’s success, it has been an absolute honor to serve alongside this Seabee Diver; I couldn’t be more proud of all that he has already accomplished and all that he will continue to do for this community.”

“BU1 Hawthorne being selected for this award was not a surprise at all,” added Lt. j.g. Justin Mulloney, Construction Dive Detachment Charlie’s officer in charge. “His leadership ability is second to none and he thrives in every environment he is put in.”

“He leveraged his expertise in cold water and ice diving to successfully lead a detachment of 15 people through a challenging training environment,” explained Mulloney.

When asked what advice he would give to Sailors seeking to further their careers, Hawthorne said others should never to be afraid to ask for help, no matter the issue. He encouraged Sailors to fight through adversity with determination and to work hard on self-improvement every day.

“I’m a builder by trade and I love my job,” said Hawthorne. “I enjoy it because it gives me a skill I can use outside the Navy. I also bring a skill into the dive community that is invaluable and allows me to problem solve when a challenge arises.”

Hawthorne serves as Construction Dive Detachment Charlie’s leading chief petty officer and is responsible for the planning, execution and supervision of construction, maintenance, repair and inspection of waterfront facilities worldwide.

Photo above: (May 15, 2019) Builder 1st Class Joseph Hawthorne, from Texarkana, Texas, assigned to Underwater Construction Team 1, sits near a decompression chamber at his command on Joint Expeditionary Base Little Creek-Fort Story, Virginia. Hawthorne was announced as the Navy Diver of the Year in a ceremony at the U.S. Naval Undersea Museum in Keyport, Washington, May 7. (U.S. Navy photo by Mass Communication Specialist 2nd Class Cat Olaes). Courtesy story.