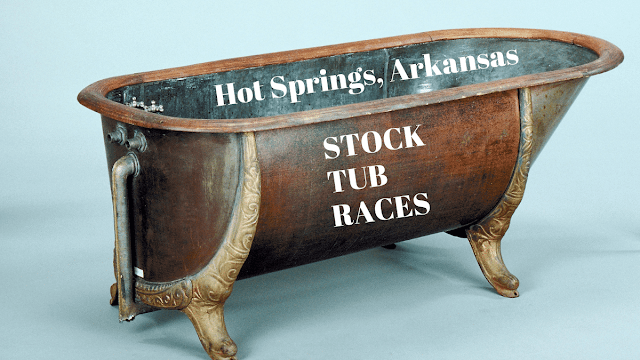 An exciting new wrinkle — or ripple — has been added that will let teams with little expertise in building their own tubs take part in the wacky competition of the Stueart Pennington’s World Championship Running Of The Tubs bathtub races in downtown Hot Springs on Saturday, June 1.

It’s called the Stock Tub Heats and it provides a competition bathtub for teams from schools, nonprofits and other groups that might lack the expertise to outfit a competition-ready tub for the races.

“In the years that I have been watching, participating in and/or organizing The Running Of The Tubs, I always would hear someone say they would love to participate in the event, but simply didn’t have the wherewithal to build a tub on wheels,” Solleder said. “Well, those days are over. This year we are introducing the World Championship Running Of The Tubs — Stock Tub Heats!”

He said, “We have designed two identical tubs for teams to simply show up and compete in the races. There is no engineering, designing, welding, bolting, nailing or painting required. The teams only need to provide themselves with some sort of costumes. This is a fun way for groups to promote their organizations.

“Here’s how it works. Stock Tub teams will need to be themed/costumed and participate in the Judging of the Tubs on Friday, May 31, at 6 p.m. in Hill Wheatley Plaza and in The Running Of The Tubs on Saturday, June 1, at 9 a.m.

“This first year we have only accepted four teams so that we get some experience in how the Stock Tub Heats will work. The teams were selected by an esteemed panel of experienced judges, who placed considerable emphasis on the intensity of a rivalry between the applicants. The teams all represent a nonprofit organization or school.”

Solleder said this year’s inaugural Stock Tub Heats will feature these four teams: The Friends of the National Park, named Friends of Hot Springs Team; the Garland County Library entry called the Grapes of Bath Team; the Spa City Pacers, and T.A.C.O (Trail Advocacy Coalition of the Ouachitas), whose entry is Team Taco. TACO is the new Central Arkansas chapter of the International Mountain Biking Association.

Adam Webb, representing the Library’s Grapes of Bath team, said "Visit Hot Springs is raisin [sic] the stakes this year by offering a stock tub heat. The Grapes of Bath has been doing a strenuous training regimen. We work until all our muscles are jelly, but we’ll be as fast as a concord [sic] by The Running Of The Tubs. We’re going to beat Friends of the National Park so badly, they’ll wine [sic] all day long. It’s going to be a grape day to race some bathtubs!"

The Running Of The Tubs will begin at 9 a.m. June 1, with the awards ceremony scheduled for 11 a.m. in Hill Wheatley Plaza. On Friday, May 31, at 6 p.m. there will be the traditional Judging of the Tubs at Hill Wheatley Plaza. This year’s judges will be Steve Arrison, Leysa Lowery, Paul Lynch, Brian Leonard, Tammy Clampet, Marianne Chartrand, Mary Zunick, Clyde Covington, Robert Zunick, Maxwell Blade, Davis Tillman, Don Gooch, Charlene Simon, Justin Simon, Ed Davis and Bobby Graham. Those judges will also enforce the stupefyingly complicated and ever-changing rules during the races.

In fact, the judges met Tuesday and created a new rule to add to the fluid list of rules already in effect, Solleder said.

“This year each female bathtub pusher (not the driver) will gain their team a five-foot head start in the race,” he said “Thus, four female pushers would create a 20-foot head start for their tub.”

This is the second year of the tub races being designated as the World Championship of Bathtub Racing.