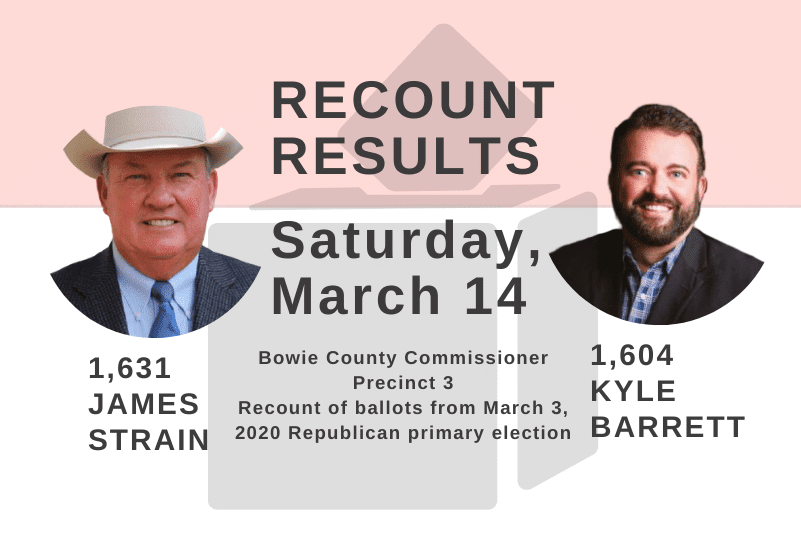 
The March 14 recount put Strain at 1,631 votes and Barrett at 1,604 votes — a difference of 27 votes, according to Bowie County Republican Party Chair Gary Singleton.


Both James Strain and Kyle Barrett have widespread support as shown in the recount. Previously, Strain was deemed to have won with 1,626 votes to Barrett's 1,596 votes for a difference of 30 votes.

The recount, which was requested by Kyle Barrett, increased Strain's total by 5 votes and Barrett's total by 8 votes. This meant Barrett netted an additional 3 votes in the Saturday recount and only trailed Strain by 27 votes.

The race has been watched closely, and some voters in the DeKalb, Texas area who voted at DeKalb High School and Oakgrove Lighthouse Church have indicated there were problems there. Click here to read more about this.

With today's recount, the race is over unless Barrett decides to challenge the race, and there is a reasonable chance that he will decide to do so.

It has previously been reported that information has been provided to the Texas Secretary of State's office about alleged problems voters had on Election Day. Find out more by clicking here.

Editor's note: Stay tuned to Texarkana News for more information regarding the race for Commissioner, Precinct 3.