CURFEW TEXARKANA: Even 5 am walkers and runners banned from solo exercise 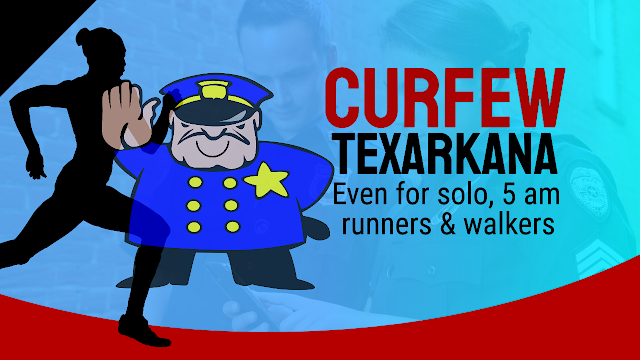 A curfew that would have been unthinkable just a few weeks ago has been placed on citizens in Texarkana, Texas and Texarkana, Arkansas, between the hours of 10 pm and 6 am beginning today, March 25, 2020.


Even runners and walkers who wake up at 5 am and run alone will have to change their exercise schedules.


The curfew applies to all citizens of the Twin Cities, except for people traveling for work or health (hospital or pharmacy).

Mayor Bob Bruggeman of Texarkana, Texas and Mayor Allen Brown announced the curfew due to the congregation of people during these hours in the two cities.

"Social distancing is not being practiced by many," Bruggeman said. "[I've seen] parking lots full of groups socializing. This is not okay."

Texarkana citizens have many questions about the curfew.

Question: What will happen when someone is cited for curfew violations?
Answer: The violation will be listed as a Class C misdemeanor, and the individual will face a fine of up to $500 in municipal court.

Question: Will interstate and highway areas be closed down during this time?
Answer: Vaughn said nothing prohibits out of town traffic from interstate and related highways, and police will be aware that people will be stopping in Texarkana for gas and supplies during the curfew hours.

Question: How will police know who to stop for curfew violations?
Answer: Somebody going around residential areas during this time without a good reason, should not do it, Vaughn said. Police will be watching residential areas carefully as well, he added.

Question: Can a person exercise on their own with walking or running at 5 am — as many do?
Answer: "Curfew is until 6 am, and, as far as I know, people who do this will need to make adjustments," Vaughn said.

The two mayors made it clear that the curfew from 10 pm to 6 am within the cities of Texarkana, Texas and Texarkana, Arkansas is "until further notice."