The Hawks, Thanksgiving and Family: Pleasant Grove vs Sunnyvale at The Star in Frisco 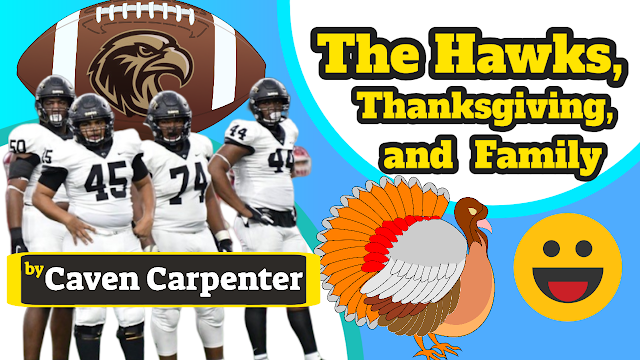 Memories of past and present Thanksgiving weekends bring back vivid recollections to columnist Caven Carpenter of the Pleasant Grove legends that made past holidays great.

He also tells us what to look for as the Hawks take on the Sunnyvale, Texas Raiders from Dallas County on Black Friday in Frisco, Texas:


Football and Thanksgiving! What a great week here in The Grove.  The Pleasant Grove Hawks continue the young tradition of playoff football on the day after Thanksgiving.


This will be the fourth year in a row that combines turkey and high school football here in Texarkana.  The Hawks take on the Sunnyvale Raiders on Friday at 7:30 pm at "Pleasant Grove West Stadium" — otherwise known as, The Star.  The Hawks are 5-1 at The Ford Center.  More about the Raiders later...

My wife, Stephanie, and I were sitting at the dinner table, discussing how thankful and blessed we are this year.

Of course, we also talked about how much we love Hawk Football during the Thanksgiving holiday. That discussion made me begin to recall the many things our family has to be thankful for.

Without a doubt, this is my favorite time of the year — regardless of Hawk Football. I’ll take 45 degrees over 100 degrees any day!

Being with family as we put up Christmas decorations combined with the familiar smells of dressing and pies makes my heart warm.

Plus, the family is all together:  Zach is home from Texas A&M, and Chloe can’t stop smiling.

Life is good. To say the Carpenters are blessed is an understatement!

I know that everyone reading this has many things to be thankful for — just like the Carpenter household here in Texarkana.

BUT, since this is a column that discusses all-things Pleasant Grove, I feel the need to share some things about The Grove that make me thankful. And I guess we should start from the beginning...

Without the courage and forethought of this group, we would not have a SEVENTH football game at The Star in Frisco on Friday.

⦿ Thank you to the former coaches.  I can’t mention everyone, but thanks, Johnny Toombs, for laying the groundwork for the athletic program.  Thank you, Rick Barker, for putting the program on the map in the mid-1990s and for some stellar seasons.

Thank you Kevin Davis for showing East Texas that Pleasant Grove can and will compete for championships.  Thanks, KD, for the 2009 season! I will never forget the Thanksgiving Friday when the Hawks not only beat #1 Argyle but DESTROYED THEM!

⦿ Thank you, band, cheer, and drill team.  Holiday travel schedules have drastically changed for these organizations since the arrival of Josh Gibson. For years, the Friday after Thanksgiving was open for family, shopping, and food... but not anymore.

How great is it to see all these kids show up to support their classmates and do it with enthusiasm? Not only that, we show other towns and schools that we are not only great in football, but just about everything else!

⦿ Thank you, Pleasant Grove Athletic Booster Club.  To every active participant past and present, I am talking about you!  I would put Quinn Stanfill and Irene Stanfill up against any booster club in America!  Take that to the bank!

⦿ Thank you, administrators, and teachers.  This would be a super LONG LIST, so I cannot name everyone.  But special thanks to Superintendent Chad Pirtle for the support you give the Hawks, band, cheer, and drill team.

⦿ I would also like to thank one person that almost anyone at PGHS would agree is the glue that holds everything together: Joyce Cook.  Thanks, Mrs. Cook, where would we be without you?

⦿ Thank you, former Superintendent Todd Williams and PGISD School Board for taking a chance and hiring a young head coach named Josh Gibson — even though he had never been a head coach before.

Seriously: Have you ever told one of our board members, THANK YOU SO MUCH, for bringing Coach Gibson to us? You should!

⦿ Thank you Hawk coaching staff and your families.  Do you have any idea how many long hours these coaches work away from their loved ones?  They do it for the kids, and they do it for us so we can be proud of our Hawk Nation!

Just tell them THANKS and also tell their spouses THANKS for what they do for our children.

While you’re at it, say thanks to Bass Deese (Band), Shera Hopkins (Cheer), and Tori DePriest (Drill Team).

I hope everyone who is reading this will take a moment and think about the wonderful things that following a high school football team around the state has brought to you and your family.

For my family and me, it’s brought togetherness.

I will always remember those HOT nights in Paris, Texas, FREEZING nights in Pittsburg, WET nights in Gilmer, and even those LATE nights in Allen.

We’ve done it all, and I am proud to say that I wouldn’t want to do it with anyone else.

By the way, I won’t name all the good food we have eaten along the way, but OHHH have we eaten well.

The past several years have also brought me closer to lifelong friends who have been buddies since elementary school, including Michael Griffin, Michael Mugno, and Jimmy Townsend.

The Hawks have helped us build a bond that will last a lifetime.  I doubt there are many people my age who can say that a high school football team has brought them so many tight friendships. This is my Crew!

I also have to thank my "Press Box Family." Without a doubt, the top press box in Texas! You know who you are. Thanks to Greg Capps for being the REAL Hawk insider.

So Hawk Nation, give thanks as you reflect on the wonderful times we've had over the past several years following our Hawks and as we look forward to many more.

The Sunnyvale Raiders come into this game with a record of 12-0.

The Raiders are coached by John Settle and led by Senior Quarterback and four-year starter Tripp McAda.

Defensive Coordinator Clint Fuller said, “McAda is probably the best QB we have seen this year.”

The Raiders run a cross between a spread and pro-style offense.

One difference between this offense and a true spread is the Raiders will use a true tight end.

Sunnyvale will want to be balanced with the pass and run.  This will be one of the better offenses the Hawks will face all year.

1. Keep an eye out for the quick slant and screen passes from the Raiders.  Tripp McAda will want to get rid of the ball fast.  This will be the first time he has thrown the ball over 6’6, 6’5, and 6’5 defensive lineman.  McAda can also run, so look for the quarterback draw.

2. Sunnyvale will try to run the ball early, so #74 Cameron Weekly will play a significant role along with #23 Dylan Hopkins.

4. Of course, watch the long pass to #1 Sergio Rodriquez.  Most teams and even us fans know it’s coming. And yet they still can’t stop it.

Tips for The Star in Frisco

There is so much to look at and do at The Star in Frisco.

➡ Dads, keep Mom away from Stonebriar Mall.  It will bring an empty wallet and heartache.

➡ Moms, keep Dad away from what’s next on my list: Santa and the Dallas Cowboy Cheerleaders on the Plaza at 6:00 pm.

➡ Remember to shop at the Cowboy gift shop and give your hard-earned money to Uncle Jerry (Jones).

➡ Parking is easy.  We use the Silver or Blue parking garage, and it’s free.  The walk to the Ford Center is short and can be fun.

Same song different verse (like last time):
1. Babes Chicken – Homemade fried chicken, fish, chicken fried steak with all the fixings served family-style.  6475 Page St. Frisco, TX 75034.  Look for the Carpenter Crew.
2. City Works (The Star) – Find great burgers and American food. The burgers and fries are delicious.
3. Cane Rosso (The Star) – Get pizza and pasta, and it was featured on Diners, Drive-ins, and Dives.
4. MiCocina (The Star) - This is Mexican cuisine with a twist. Don’t drink the Margaritas... you know who I’m talking to!
5. Buc-ee’s – If you take I-30 all the way to the George Bush Turnpike, Buc-ee’s is a must.  Amazingly clean public restroom — the best this side of the Mississippi.

After the surprise attack on Pearl Harbor on December 7, 1941, Japanese Admiral Isoroku Yamamoto said: “I fear all we have done is to awaken a sleeping giant and fill him with a terrible resolve.”

It doesn’t take much to motivate teenage boys. This started back in June when Sunnyvale defeated the Hawks in the 7-on-7 state championship game.

Let’s just say the Raiders were full of themselves that day, so I wonder if the things that were mentioned will come back to haunt them.

Fast-forward to this week: A video showing the Sunnyvale student section chanting “WE WANT PG, WE WANT PG” showed up on social media with verbal shots being taken at PG players.

For this, I would like to be the first person to say "thank you" to Sunnyvale!

Remember my young Hawks, if you are reading this, the Raiders signed up for 48 minutes. They can’t back out!  You may want to remind them as often as you can!

SO THANKFUL TO BE ALIVE AND BLESSED AND STILL WATCHING FOOTBALL IN THE GROVE!