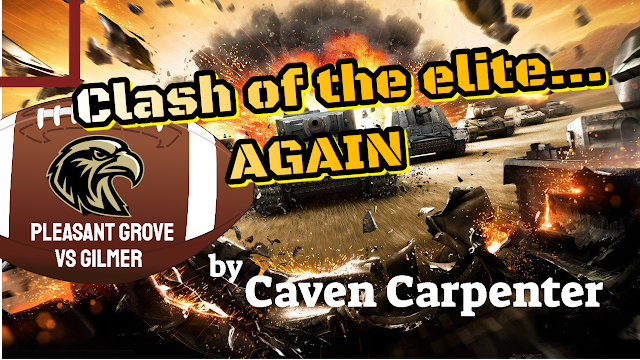 Hawk Stadium in Texarkana will again be a central focus for Texas football fans this week.

Caven Carpenter breaks down the players to watch and the recent history between the two teams:

What a treat it will be for Texarkana football fans to have two of the top teams in Texas visit Hawk Stadium within three weeks.

Ask anyone to name the top programs in Texas 4A football over the past 10 years (whether it be in South, West or East Texas) and you'll get the same response: Carthage, Gilmer, West Orange-Stark, Celina, and Argyle.

If the same people were asked to name the top teams over the past 3 years, the Pleasant Grove Hawks would be right near the top.

All of the football programs listed above have many things in common: 1) Great athletes; 2) Excellent coaching staff; and 3) Extraordinary off-season and summer workout programs.

However, what may separate them from other programs is a winning attitude and the belief that they can and will win every game they play.

In other words, it's just like the phrase Pleasant Grove Coach Josh Gibson says all the time: “The kids have bought-in.”

But what does “bought-in” actually mean?  The phrase signifies that these individual players understand what it takes to be a state champion and will put in the work.

This includes doing whatever it takes to achieve their lofty goals.

It’s almost a form of brainwashing (in a positive way), because it makes every kid see that future success is actually achievable. And very few programs have this.

But just like all the other teams I mentioned, Gilmer has all these attributes.

This is the reason that Friday night's game against the Gilmer Buckeyes will be HUGE!

Six reasons I feel good about the Hawks

1. Two of Pleasant Grove's absolute DUDES will be back Friday night. Junior, #6 Nick Martin will be back at outside linebacker and running back position. Nick had been out of commission the past two weeks nursing a sprained ankle.

2. Gilmer will have a difficult dilemma, and the team will be forced to make a tough decision: Choosing if they go right towards Landon Jackson or left towards Nick Martin and Marcus Burris.

Also, the middle is no cakewalk with Linebacker #23 Dylan Hopkins.

By the way, I spoke to University of Arkansas Assistant Coach Jeff Traylor two weeks ago, and the Hogs are high on Nick Martin!

3. Senior, #54 Jamie Lewis is back after sitting out several weeks with a knee injury.  The Hawks have missed his leadership and his play on both the offensive and defensive lines. Jamie’s size and speed always help him become a dominant force on the field.

It's unusual for a kid that size to be able to play so many snaps. This is a testament to the hard work he has put in during the summer and off-season. I’ll guarantee that Jamie will make a huge tackle for a loss, and a huge block that will spring one of the Hawks' backs.

4. Pleasant Grove never gave up against Carthage to the very end.  Remember, the score was 7-7 at half and 14-14 with 7:00 to go in the fourth quarter. WHAT IF Nick Martin, Jamie Lewis, and Josh Porchia had played defense during that game?

5. Hawk Stadium is unique during big games like this — despite the result of the Carthage game. So the energy level will be way up with the crowd and the Hawks.

6. Senior kicker, #14 Anthony Mejia hasn’t been talked about much, but have you noticed how well he has played?  Can you remember the last time he missed an extra point?  Me either! This may come down to a handful of points, and Anthony has ice water in his veins.

Four things that concern me

1. Gilmer only lost to Carthage by a score of 24-15 on September 20, 2019, and Gilmer shut out 3A powerhouse Newton 16-0. This means the Buckeyes don't shrink in big games, and it doesn’t get much bigger than this Friday night at Hawk Stadium.

2. A little bird told me that the Gilmer faithful believe this may be the best defense the Buckeyes have had in years. And trust me, they have had some great ones!

3. This will be the third time in ten months that Gilmer will see the Hawks and the Wing-T. One of the things that makes the Hawks' offense so impenetrable is that most teams rarely get to play or practice against the Wing -T.

4. Maybe the most essential thing the Bucs have going for them is that the team will almost certainly come into Hawk Stadium with swagger and have confidence that they will win the game. As I have mentioned previously in this column, when a coach can get his team to believe that a state championship is the team's destiny, they are much harder to beat.

I got a call last week from Dave Campbell’s Texas Football magazine asking if I would take part in a special presentation.

The company I work for, Texas Farm Bureau Insurance, is a major advertising partner, so the magazine wanted an agent from Texarkana to participate.

Of course, when I heard the recipient was CONNOR STANFILL, I jumped at the chance even faster!

The award is called the "Unsung Hero Award," and I cannot think of a more deserving kid than Connor.

He actually represents many of the values espoused by Texas Farm Bureau.

I work for a company that prays (to Jesus) before every meeting: local and corporate.  So I’m sure Connor would fit right in.

Connor is getting this award for his service to the community and in the classroom.

If you would ask Coach Gibson who on the PG team would be first to volunteer to help others, he would almost certainly say it’s Connor.

When a teacher or coach moves to Texarkana, Connor is the one to head up the football team moving crew. When a young player needs a ride to practice or a summer workout, Connor is your guy.

Connor can also be the spiritual leader of the Hawks.  He gets this from his Christ-loving parents Irene Stanfill and Quinn Stanfill.

And, oh yeah... Connor Stanfill is probably one of the best two or three offensive linemen in Pleasant Grove history!

➼ Keep an eye on #23 Dylan Hopkins at linebacker.  Most football players enjoy hitting people, D Hop LOVES IT!
➼ This will be the best game of the year for #10 Ben Harmon. He was born for this.  Bet your house on it!
➼ Over/Under on Landon Jackson sacks: 1.5
➼ Over/Under on Sergio Rodriguez touchdowns: 2.
➼ Over/Under on crickets: 4,534,698.