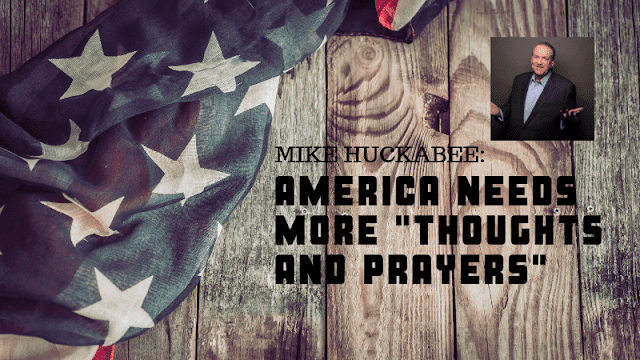 As twin tragedies unfolded in Dayton and El Paso, some people continue to denounce people of faith, sending "thoughts and prayers" to victims and their families.

However, former Arkansas Gov. Mike Huckabee says he will continue to offer thoughts and prayers to victims of violence, and he explains why he will do it.

"Despite all those who are denouncing the idea of prayers for the victims, I will continue to pray for the victims and their families and for an end to this mindless violence, and I hope you will, too," said Huckabee, the former pastor of Beech Street Baptist Church in Texarkana, Arkansas.

He added: "In fact, amid all the finger-pointing and blame-laying and repulsive attempts to turn these tragedies to political advantage before the bodies are even cold, I would posit that the lack of thought and prayers is probably the single biggest factor in what is behind them."

Gov. Huckabee wrote the book "Kids Who Kill" in 1998 which was in response to the "Jonesboro massacre" that left four students and a teacher dead and 10 injured.

According to the former governor, the shooter in El Paso (whose name he would not mention) said he was outraged about immigration before President Trump came onto the political scene, and the Dayton shooter was an Elizabeth Warren supporter "who praised Satan."

Huckabee pointed to shootings this weekend in Chicago as proof that the media is trying to create a narrative for political motives. He said 49 people were shot over the weekend in the

"The tragedy that’s being largely overlooked by the media: over the weekend, 49 people were shot, six fatally, in various shootings in Chicago," he said. "Chicago gang shootings can't be blamed on Republicans, lack of gun laws or racism, so they tend to get little press coverage."

The bottom line, according to Huckabee, is that the government can "pass laws, blame the tools, ban free speech, point fingers, and argue politics from now until doomsday."

However, he said that you can "never legislate the evil out of people’s hearts."

Teaching morality and values is one way violence can be curbed, he added, in a blog post titled "Twin Tragedies."

"This is never going to end until we have a reawakening of morality and values, and until kids are brought up once again to believe that we are all made in the image of God, that life is sacred and superficial differences like skin color are meaningless," the governor said.

According to Huckabee, attempting to pass more laws and pointing fingers is just like "rearranging the deck chairs on the Titanic."

He added: "That’s why I will keep ignoring the scoffers and saying prayers and urging everyone to join together and do the same. It’s not a meaningless gesture.  It’s the only thing that’s ever really going to help."