Twins barely get edged out in exciting game against the Generals 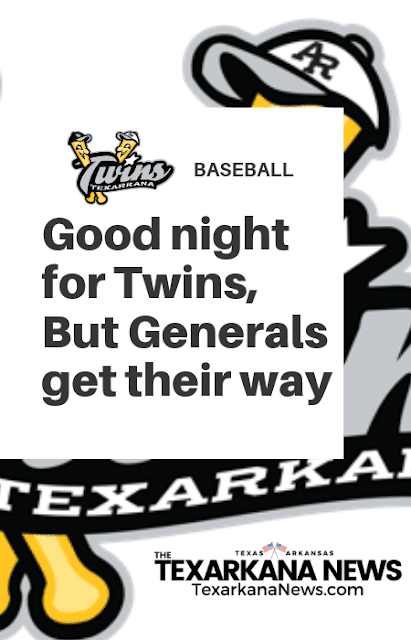 However, Tom Lichty was only a homerun away from the cycle and Braydon Cadeur was lights out on mound.

Even with the great pitching of Braydon Credeur and Joseph Standley the Twins could not find enough runs to get the job done.

The Texarkana Twins could not keep the lead over the Generals after being  up 3-1. The Twins again struggled by leaving 10 guys on the base pads for the second game.

The Twins were able to strike first against the Generals. Noah Sifrfit was able to score off a throwing error by General’s third baseman Resse Johnson, putting the Twins up 1-0. The Generals would strike back by a solo homerun by Coby Potvin, but the Twins were able to strike back quickly by scoring in the top of the 5th. Tom Litchy hit a triple to bring in Shea Gutierrez and then Lichty was able to score after a wild throw that went into the General’s dugout. The Twins being up 3-1 it was looking good until the bottom of the 6th happened.

In the bottom of the 6th, the Generals had runners on the corners with 0 outs and Cody Potvin at the plate. Potvin then laid down a bunt right in front of home plate, Brian Hamilton who had come in to pitch, charged the ball and filled it to the catcher Christian Boulware who tagged the runner coming home. However, the runner was called and the Generals made it 3-2. Head Coach Bill Clay was thrown out of the game for arguing the call, and Lee Thomas was thrown out as well. This is when it went down hill for the Twins, as they allowed the Generals to add two more runs in the top of the 7th to go up 5-3. The Twins again left 10 men on base tonight against the Generals, and in these two games in Victoria alone, they left 20 men on base.

At the plate tonight Tom Lichty was outstanding. Lichty was 3-5 on the day and was only a homerun away from the cycle. Ryne Randle, who was in a small slump, was able to break out of it today with 2 hits. On the mound, Braydon Credeur was lights out with 8 strikeouts in only 5 innings, and reliever Joseph Standley was also great on the mound by not allowing a run and getting 2 strikeouts, keeping his ERA at .000.

The next time the Twins are at home is Thursday, June 27th against the Military All-Stars in an exhibition game at George Dobson Field. This starts a 4 game homestand including a double header on Saturday, June 29th against the Bombers.