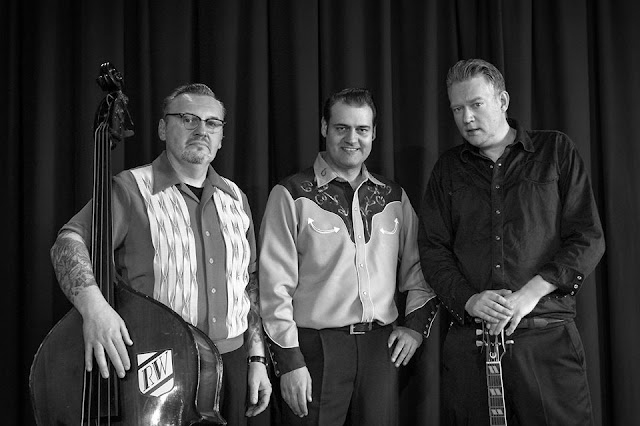 The European band named the Texarkana Trio, which toured Europe and later America to great acclaim, has retired. However, two members of the trio had already formed another band as a side project called Supersonics, and that group recently inked a record contract with a company in Spain.

The Texarkana Trio visited the cities of Texarkana, Arkansas and Texarkana, Texas for the first time in 2017 during the Scott Joplin Regional Music Celebration and played at two theaters. The band was also humbled to meet famed local Texarkana and Rockabilly musician Pat Cupp, who was honored at the Arkansas Municipal Auditorium before its full renovation during the Texarkana Trio's visit to the Twin Cities in 2017.

The Texarkana News talked to Pascal Snijders, who was singer in the Texarkana Trio and is a part of the new group named "Supersonics." He said the band's time in Texarkana was an experience none of them would ever forget.

"We had the best time of our lives when visiting Texarkana and playing the two shows we did in your great theaters," Snijders said. "Meeting Pat Cupp and his family and all of the people in Texarkana was absolutely one of the highlights of my life."

The band was also pleased to perform at the Perot Theatre in the presence Pat Cupp and his family as part of the Scott Joplin event. "We performed a few of [Cupp's] Rockabilly songs, which have gotten a cult-status within the Rockabilly scene," Snijders said.

As part of the Texarkana tour, the trio also made short visits to Tupelo, Memphis, Shreveport and Atlanta, Georgia. A 48-minute video of the group's 2017 Texarkana tour was released on Facebook. Click here to watch.

Snijders said the bass-player who joined the Texarkana Trio on what he calls "the Texarkana adventure" was not the regular bass-player for the band in Europe, because that band member could not travel due to work.

So [bass player] John Hofmans joined us and replaced him," Snijders added. "Besides, Texarkana Trio guitarist Jeroen and I have another band. John Hofmans is bass-player for Supersonics, so he was the obvious choice to replace our regular bassist." 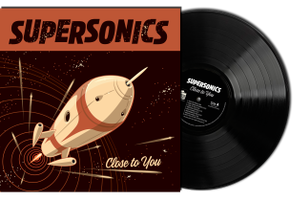 Snijders said Supersonics is also a roots, rock 'n roll band, but he said it is not limited to Rockabilly and strictly original songs. Due to the great success of Supersonics in Europe which had more than 40 performances in the first year, Snijders said it was difficult to juggle two bands.

"It was impossible to combine this with Texarkana Trio." Snijders said. "Maybe we will do some gigs here and there as a trio, but then it will be with John who also joined us in the USA. So, you never know. But, right now, the focus will be on Supersonics."

The band announced the retirement of the Texarkana Trio in March 2019 on social media like any Rockabilly act should - with a simple statement and a video of Elvis Presley. The band's Facebook page said: "The Texarkana Trio has stopped. Thanks for watching and goodnight." 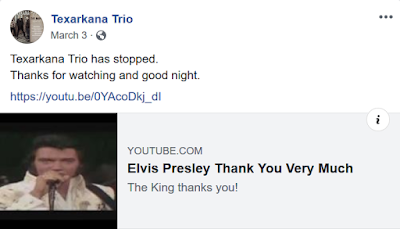 The focus on Supersonics became more important after the band signed with Spanish label El Toro Records, which will release the group's new album in June. Click here to visit the Supersonics website for more information.

"As you can imagine, things can get busy for us, so Supersonics is priority now," Snijders added. "Maybe we could do a US tour with Supersonics and visit Texarkana again, we sure would like to come back and meet you lovely people again."

Snijders ended the conversation by thanking the people of Texarkana and the Ark-La-Tex for being interested in them. Like the seasoned performers they are, Snijders and the Texarkana Trio left the stage with the public wanting more. And his simple statement at the end of the interview will tug at the heartstrings of local fans of the Rockabilly trio. Snijders said:  "We will never forget. Thank you!

And we will never forget you, either.

Editor's note: A reporter who now works for The Texarkana News interviewed the Texarkana Trio soon after they formed in 2015 and wrote an article about the band. He offered us the chance to publish it for historical purposes. We proudly present the 2015 article below.

Late last year in Belgium and the Netherlands, a group of three talented musicians were brought together in what can only be described as an accident. The men were completely unknown to each other and had not even met before their first performance. But all of them shared a love for Rockabilly music and a distant memory of a song they had heard called "Texarkana Baby."

The odd happenings that brought the band together were the classic tale of one band cancelling and another band immediately forming. In this case, the venue was the very first "Vintage Market Live" festival in Antwerp, Belgium, and the other band's cancellation left organizers in quite a bind. In fact, they needed another band fast.

So circumstances collided and brought the musicians together for "Vintage Market Live," and that's how the band known as the Texarkana Trio came together for the first time in Antwerp, Belgium.

Now, the three-piece band is touring Dutch and Belgian cities, and the members have started a Facebook page and a new website. On the site, the band discusses how the group came together, and they even informed fans that one member had been replaced - which is common for new bands everywhere.

However, the interesting thing for Texarkana, USA residents can be found on the "about" page of the band's new website. The Texarkana Trio specifically mentions that its influences are Elvis Presley and Johnny Cash. In fact, they are the only musicians listed on the page. Here is the exact way the Texarkana Trio describes its music:

Texarkana Trio is a rockabilly outfit, just like it was meant to be back in the 50's. A double-bass, an electric guitar and an acoustic guitar with lead-vocals. No drums. Just like Elvis began his career at Sun Studio in Memphis back in 1954. And Johnny Cash and the Tennessee Two... and many more. It's rhythmic, stomping rockabilly music, with a little bit of hillbilly bop, country boogie feel to it. Self-penned originals are being written as we speak.

Now, flashback exactly 60 years from the first day the Texarkana Trio formed, and another strange twist of fate emerges. In fact, this is an oddity that even the Texarkana Trio did not know about until we tracked them down in the Netherlands.

It was the Fall of 1955, and Elvis Presley was big news in Texarkana and beyond. He had visited the city several times but still wanted to create even more excitement for his upcoming September 1955 shows in Texarkana.

Presley talked directly to the people of Texarkana in a radio interview with Bob Neal of WMPS radio in Memphis, TN. He discussed his previous visits to Texarkana and  invited all Texarkanians to his two concerts on September 2, 1955 at 7:30 p.m. and 9:30 p.m. at the Arkansas Municipal Auditorium.

During the interview, Presley encouraged the Twin Cities to come see him and Shreveport's D.J Fontana (along with Floyd Cramer, the Louisiana Hayride band and others). But Presley gives special attention to opening act Johnny Cash - who he tells the people of Texarkana is a "swell young fellow" with a great song called "Cry, Cry, Cry." Music historians say Johnny Cash gave one of his first public performances of "Cry, Cry, Cry" in Texarkana along with the song "Hey, Porter" You can hear the full Elvis Presley interview by clicking here for the Youtube video or clicking here to read a transcript in Google Books.

On September 2, 2015, the city of Texarkana dedicated a plaque to commemorate the two concerts held on September 2, 1955 that brought the two music icons together at the Arkansas Municipal Auditorium. Some local residents were on hand who attended the concert 60 years ago, and they recalled the concert cost about $1 to attend.

Elvis Presley's friend, guitarist and audio engineer Scotty Moore accidentally wrecked Presley's famous Pink Cadillac in Texarkana, Arkansas the day of the concert causing $1,000 in damage. Thankfully, Elvis had the car fixed after he later signed his contract with RCA.
However, Texarkana Trio founding member Pascal Snijders had no idea that the only two musical legends - Johnny Cash and Elvis Presley - listed on his band's website had performed two major shows in the city of Texarkana, Arkansas almost 60 years to the day from when the Texarkana Trio formed 4,788 miles away in Antwerp, Belgium. Some people might suggest that the two musical legends spirits had been working overtime. But the simple twist of fate is probably best accounted for by the influence of the two singers on music worldwide.

Snijders said the band chose the name "Texarkana Trio" for a couple of reasons: "It sounded very cool, and it had a link with a song called "Texarkana Baby," he said. "We don’t play the song, but it’s the hillbilly, western and rockabilly style we would like to do with our band."

Indeed, the band' founder said the song might be included in the band's future concerts and that it might be a "good idea after all."  "I know western swing and other country roots styles are big in Texas," Snijders said.

"Texarkana Baby" was a very popular song for RCA, but the the Eddy Arnold song is most notable for being the first 7-inch, 45 RPM single ever released in the United States in March 1949. And this historic 45 was only preceded by the first 7-inch 45 ever pressed -  a demonstration disc from RCA titled"Whirl Away" which just so happened to contain a sample of Eddy Arnold singing "Texarkana Baby." So the song's place in the history of recorded music is firmly rooted.

The Texarkana Trio is somewhat removed from the slower, easy pace of the song "Texarkana Baby," and the band boasts an enviable roster of talent with a very high level of musicianship. Even though the group is relatively new, the band's lead vocalist told us that his group would like to tour the United States in the future. "We would love to do a tour in Texas and Arkansas. And, of course. Texarkana would be high on the list of cities to play," Snijders said. In addition, the founding member said he had never visited Texas but toured Arkansas briefly on his way to Memphis during one of his four visits to the United States.

Texarkana's most enduring musical legacy is almost certainly native son Scott Joplin whose Ragtime compositions influenced jazz, big band swing and other important musical genres. However, the Texarkana native, who wrote the "Maple Leaf Rag," also inspired the music of Elvis to some degree, according to music experts.

And there is a solid historic thread in the story of the Texarkana Trio forming exactly sixty years after the famed Elvis Presley/Johnny Cash concerts that Texarkana, Arkansas just commemorated only a few months ago. Indeed, upon reflection, it is also clearly evident that southern roots music, which partly originated right here in the Ark-La-Tex, can encourage and inspire people not only in the United States - but, quite literally, around the globe.

So long live the Texarkana Trio and all the hardworking bands and musicians across the world like them making their mark on society and bringing joy with southern-influenced music with a tinge of Texarkana.