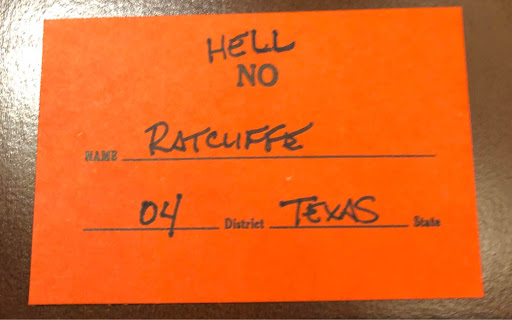 Northeast Texas congressman John Ratcliffe added an extra special word to his House of Representatives vote against impeachment of the nation's 45th President.


The congressman, who represents Texarkana, Texas and the 4th Congressional District, shared a photo of his vote with the handwritten word "HELL" over the word "NO."


"If there was ever a time to vote "hell no," this was it," Ratcliffe said.

On Wednesday night, the Democratic-led Congress who has attempted to find grounds to impeach the president since Nancy Pelosi regained the Speaker's chair in January 2019 voted to impeach President Trump.


Ratcliffe, a staunch Trump supporter who was previously tapped by the president to be the Director of National Intelligence, has defended the president consistently over what he and other Republicans say is a "sham" impeachment based on "no crimes."

The vote by Ratcliffe will likely be very popular in the 4th Congressional District as Trump beat Hillary Clinton in a landslide in 2016 in the district.

One other congressman, Mark Walker of North Carolina, also decided to take inspiration from Ratcliffe and voted "Hell No" as well.

The vote to impeach President Trump included no Republican members, and the action by the Democrats has actually coincided with an increase in the president's popularity as measured by the RealClearPolitics index.

Now, Democratic leader Nancy Pelosi is refusing to say when the House of Representatives will send the impeachment to Senate leader Mitch McConnell of Kentucky for trial as some Democrats have complained that they do not believe the Senate rules will be fair to the House prosecutors.

However, House Democrats have not discussed any concerns for Senate trial fairness for the accused:  President Trump.