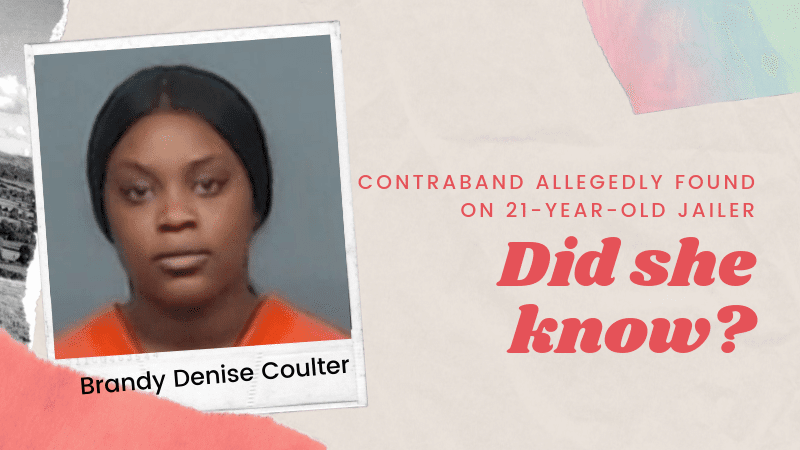 A 21-year-old woman, who is a jailer in Bowie County, has been arrested for allegedly attempting to smuggle contraband into a correctional facility.

The report of the arrest from the Bowie County Sheriff's Office indicates that an informant told Texarkana, Texas Police Officer Colton Johnson on Tuesday, August 13, 2019, that a jailer whose last name was "Coulter" was "possibly bringing contraband into the jail."

Johnson informed Bowie County Captain Robby McCarver and told him the information about the alleged contraband from "Coulter."

Very conveniently, a jailer named Brandy Denise Coulter was due at work the next morning.

Police say Coulter of Texarkana, Texas arrived at the jail as usual on Wednesday where she was immediately confronted and searched.

It is alleged that Jailer Coulter had marijuana and tobacco on her person, but the amount of the seized substances was not detailed by police.

The Bowie County Sheriff's Office said it was "hidden inside the rear crotch area of a pair of leggings she was wearing under her uniform."

The jailer was arrested for bringing a prohibited substance into a correctional facility and later booked. Her bond was set at $75,000, and police say she declined to cooperate with investigators.

As a jailer, Coulter is part of the broad law enforcement community.

We are supporters of all people who help keep our local neighborhoods safe, and these include our hardworking jailers who protect and guard individuals in our correctional facilities.

Therefore, we believe all the facts need to come out.

The arrest was based on an informant that seemed to know when she would allegedly be bringing contraband into the jail.

So how the alleged contraband was reportedly hidden in Coulter's clothing becomes an issue that must be carefully examined.

For instance, is there any way the alleged contraband could have been planted inside her clothes without her knowledge?

Police did not give us enough information to decide on this.

Of course, the evidence looks damming, but the police (and even jailers) do have enemies in 2019. We saw this yesterday in Philadelphia. Individuals also have personal adversaries.

Jailers in our community put their lives on the line, and we all remember that local jailers and prison guards in the Ark-La-Tex have been killed while doing their jobs.

It is because of our respect for our local jailers that we must take the utmost care in making sure justice is done.

That's why there should be no rush to judgment.

We need a judge and jury to decide on the most crucial question about any contraband that was allegedly found in her clothing: