John Ratcliffe to be named Director of National Intelligence by President Trump: REPORT 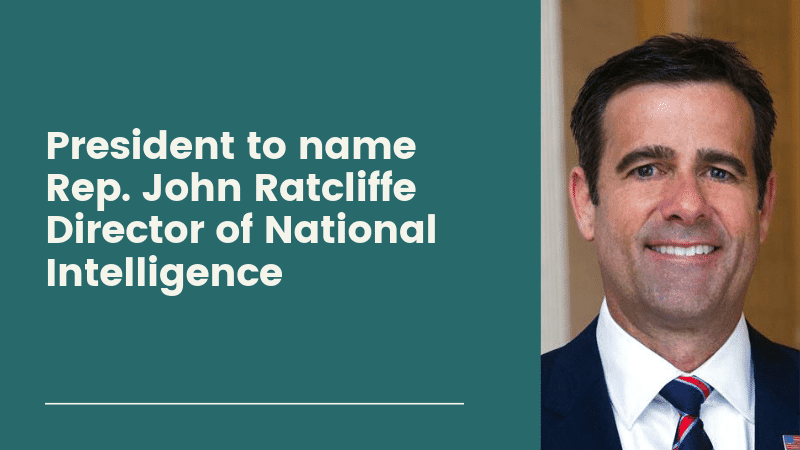 Ratcliffe has long been on the radar of political experts for high-level openings in the Trump administration, and he was also on the shortlist of candidates considered for the position of U.S. Attorney General that was filled by William Barr.

Rep. Ratcliffe is the former mayor of Heath, Texas in Rockwall County and former Acting U.S. Attorney for the Eastern District of Texas.

The Texas congressman was widely praised last week by conservatives for his intense grilling of former Special Counsel Robert Mueller.

Earlier today he was on a widely publicized TV program alleging that the Mueller Report was not written by the Special Counsel himself but by deputy Andrew Weissmann and other Democratic lawyers hired by Mueller.


Nadler and Schiff are starting to look more and more like Laurel and Hardy. It’s time to move on… Trey Gowdy said it best this week, the person who learned the most about the Mueller report during Wednesday’s hearings was Robert Mueller. And that’s sad but true. And the Mueller report and its conclusions weren’t from Robert Mueller. They were written by what a lot of people believe was Hillary Clinton’s de facto legal team, people that supported her, even represented some of her aides. So the Mueller report is really going to be difficult for the Democrats or anyone to rely upon the findings of a report when they just listened to the man whose name was on top of it not have a command of what was even in it.