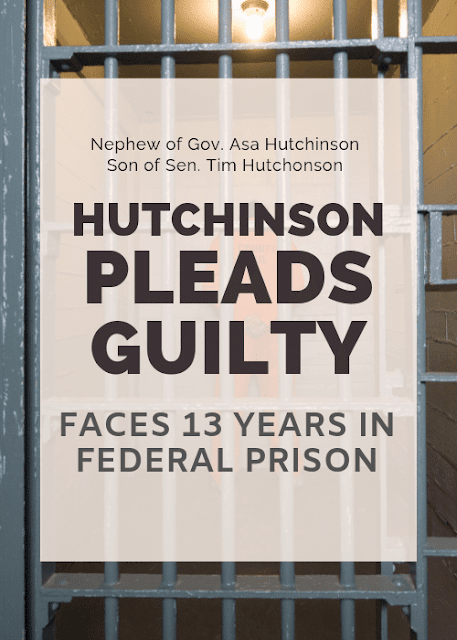 Hutchinson, 45, of Little Rock, Arkansas, was previously a state senator and representative prior to resigning after he was charged in the Eastern District of Arkansas to a 12-count federal grand jury indictment with eight counts of wire fraud and four counts of filing false tax returns.

The indictment alleges that from 2010 through 2017, Hutchinson stole and misappropriated thousands of dollars in state campaign contributions for his own personal use and then filed false federal income tax returns from 2011 to 2014 to conceal his conduct.

Hutchinson was also previously charged, in a 32-count federal grand jury indictment, in the Western District of Missouri, for his role in a multi-million-dollar public corruption scheme that involved embezzlement, bribes and illegal campaign contributions for elected public officials.

As part of his plea, Hutchinson admitted that he was hired by an unidentified individual as outside counsel, and in exchange for payments and legal work, Hutchinson pushed legislation beneficial to that individual.

Hutchinson admitted that he was provided legal work to conceal the corrupt nature of his arrangement and that he would have never been hired if not for his position as an elected official.

Hutchinson further admitted as part of his plea that in 2011, he stole over $10,000 in state campaign funds for his own personal use and also falsified his 2011 tax returns, including failing to report $20,000-per-month-payments he received from one law firm and other sources of income he knowingly and intentionally concealed from his taxes.

Count 1 of the Western District of Missouri superseding indictment, which Hutchinson, pursuant to his plea agreement, is expected to plead guilty to after today’s hearing before Judge Baker, alleges that Hutchinson and other elected officials accepted bribes in the form of monthly legal retainers and other things of value, from employees and executives of Preferred Family Healthcare Inc. (formerly known as Alternative Opportunities Inc.), a Springfield, Missouri-based, healthcare charity.

In exchange for the bribes, Hutchinson and other elected officials allegedly provided favorable legislative and official action for the charity, including directing funds from Arkansas’s General Improvement Fund (GIF).

“As I have indicated previously, the investigation into the rampant pay to play corruption scheme present in our state capitol is ongoing,’ said the United States Attorney for the Western District of Arkansas, Duane DAK Kees, “This plea represents a serious watershed in exposing this use of sham retainers and consulting arrangements to influence the passage of law.  The previous pleas and convictions uncovered the use of these arrangements in the distribution of GIF funds, youth lock-up facilities, and Medicaid expansion, but this revelation makes clear that it affected far more than that.  The unprecedented cooperation between the two districts of the State of Arkansas, the Western District of Missouri, and the Public Integrity Section of the Department of Justice has brought the necessary resources to bear to bring this troubling conduct into deserving public scrutiny.”

The multi-district investigation was conducted by the FBI, IRS Criminal Investigations, and the Offices of the Inspectors General from the Departments of Justice, Labor, and the Federal Deposit Insurance Corporation (FDIC).  The cases are being prosecuted by Trial Attorneys Marco A. Palmieri and Sean F. Mulryne of the Criminal Division’s Public Integrity Section; Assistant U.S. Attorneys Stephanie Mazzanti and Patrick Harris from the Eastern District of Arkansas; Assistant U.S. Attorneys Ben Wulff and Aaron Jennen of the Western District of Arkansas; and Steven M. Mohlhenrich of the Western District of Missouri.