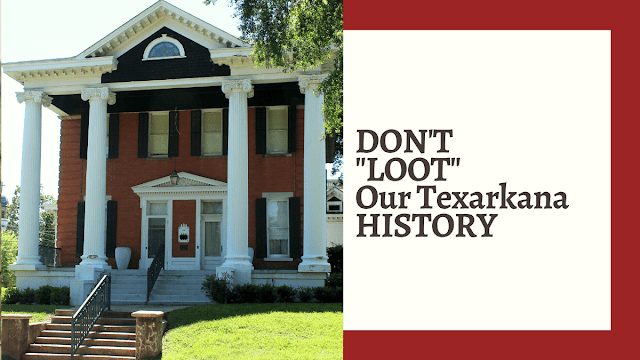 A Texarkana landmark is in the process of being destroyed, and reporter Joshua Williams has a definite opinion about whether the action is right or wrong:


It's a winner take all world, and as they say: "to the victor belongs the spoils."


But no one wins when a historic church obtains an equally historic Texarkana home — on the National Register of Historic Places, no less — and apparently attempts to expand its church property to the entire block by demolishing another piece of history.


Surely, the church (which is listed as the owner of the property on the Miller County tax roll). must now realize that endeavoring such a brazen act without commenting on the public outcry is cowardice — or maybe something worse.

The beautiful Claude Foulke Home (also known as the Joe B. Wilson House) was said to be built in 1903, and everyone in the Texarkana area recognizes its tall, fluted ionic columns. I'm a Baptist who loves churches and classic architecture - especially local historical buildings. So why can't we have both?

The original owner was the son of railroad tycoon George Foulke, and the woodwork inside the home has impressed visitors for more than a century.

If the church is not willing to speak, there are other options. That's why people have been talking about ways to stop the demolition of the Foulke/Wilson House as well as what symbolically appears to be the "looting" of Texarkana history.

Some in Texarkana have spoken about a lawsuit. Likewise, a few church members have discussed withholding their tithes on Sunday and including a note of protest in the offering plate.

The president of the Texarkana Museum System also had an idea: Velvet Hall Cool said no one should buy the fixtures or items from the house, which are being offered by Estate Sales by Janessa Pankey.

So how did the people engaged in this outrage not realize it was a mistake in the first place?

None of us really know how or why the Claude Foulke/Joe B. Wilson House is in the process of being destroyed. If there's a really good reason that it is coming down, then the public should know about it.

However, without further explanation, there should be no doubt to anyone that it is bad for the community and it's just plain wrong.

Take our Texarkana News Poll: Let us know what you think: